Happy Pancake Day! Restaurants and recipes to help you celebrate 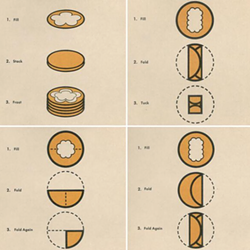 Yes, today is Mardi Gras – laissez les bon temps rouler and all that, gumbo and king cake and hurricanes. But if you wanna break out of that New Orleans take on the day (like maybe if you have to work tomorrow?), there's a way you can celebrate without destroying your liver.

In some cultures (generally, Anglican rather than Catholic) the day before Ash Wednesday isn't known as Fat Tuesday-aka-everybody party hearty!; it's called Shrove Tuesday-aka-eat some nice pancakes today, for tomorrow the fasting begins. So, if you hail from or just identify with those Anglican nations – mostly the U.K. and former British colonies – you may already know that they call today Pancake Day.

With no opinion of the various religious observations, I'm just going to say that on a Tuesday night at this point in my life, I'm more down for pancakes than dancing on tables. If you are too, Pancake Day is a good excuse to eat breakfast for dinner. Make your own: The Jamie Oliver recipe video at the bottom of this post could not be easier, or try this savory take with corn, feta, avocado and bacon. Or go out: We pulled together a brief list of restaurants that serve breakfast into the evening hours. Now you just have to decide what you're giving up for Lent.


Morning all #Recipeoftheday my Easy one-cup pancakes! Just 1 Egg, 1 cup self-raising flour, 1 cup of milk, pinch of salt. Whisk it up! Pour into a hot frying pan and FLIP! You don’t even need scales to weigh out the ingredients – all you need is a cup or a mug! Then just add your favourite topping. Proper easy! Tag in your friends and show them how it's done. ENJOY Jamie #PancakeDay #ShroveTuesday