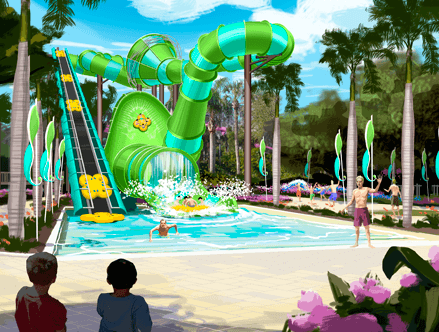 With water parks rumors running wild right now here in Orlando, it’s easy to forget that Tampa also has one of the best water parks in the state. Adventure Island  (owned by SeaWorld Parks and Entertainment) is ramping up for the 2015 season with its first new ride since 2006 – Colossal Curl. The new 70-foot-high attraction will be the tallest in the park. It replaces the Gulf Stream waterslide and will use the same queue tower.

The ride features four-person rafts in a 560-foot-long flume of corkscrews, waterfalls and a funnel. In Water Country USA, the sister park to Adventure Island that’s located in Virginia, a similar slide with the same name opened in 2014. That slide does have many of the same features, though the layout of the track itself is a bit different. Speaking of similar brands: The dining area overlooking the new ride is a Mango Joe’s Café, a restaurant also found at SeaWorld Orlando.