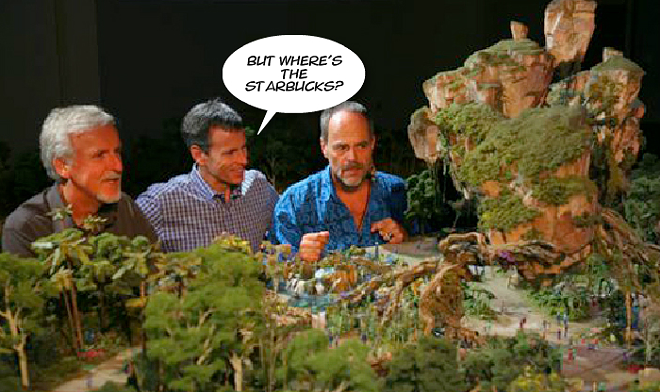 Starbucks' march into (Disney) world domination looks to be continuing, with Disney now confirming that its final Orlando park without a Starbucks, Animal Kingdom, will get one later this year. The Creature Comforts store on Discovery Island closed late last year to make way for the new Starbucks. The retail footage lost will be replaced by an enlarged store just across the street. It’s believed that the Animal Kingdom Starbucks will be open by early to mid-summer.

It has been nearly two and half years since Disney first announced that the four Orlando parks would be have their own Starbucks. The first one, which opened in June 2013, replaced the Main Street Bakery in Magic Kingdom. The second, which opened in September 2013, took over the Fountain View café space in Epcot’s Future World. A Hollywood Studios Starbucks opened earlier this month in the former L.A. Prop Cinema Storage retail space at the corner of Hollywood and Sunset boulevards.

The new Animal Kingdom location looks to be similar to the Hollywood Studios store in that it will have park-themed décor, unlike traditional Starbucks locations. The Hollywood Studios Starbucks, named the Trolley Car Cafe, contains plenty of hidden WDW references, and it's representative of the kind of imagineering Disney is known for.

Walt Disney World also has two Starbucks at Downtown Disney/Disney Springs. Unlike the in-park locations, the Downtown Disney West Side Starbucks now serves beer and wine (part of the "Starbucks Evenings" program) – a first for any Starbucks in the state.