This Little Underground: Justin Townes Earle, Gill Landry and how the Dr. Phillips Center is a sudden rock venue contender 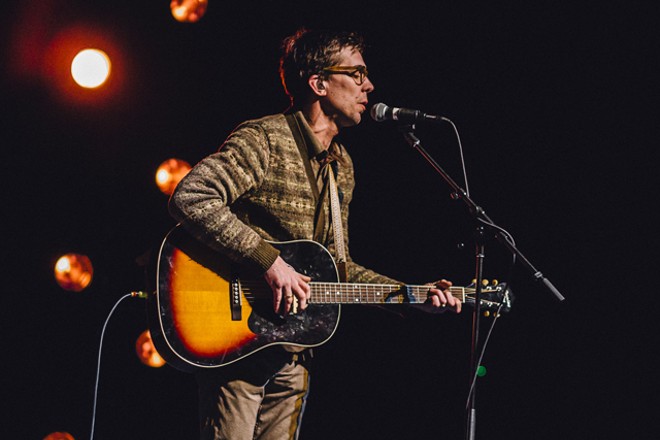 I wasn’t always sold on Americana prince Justin Townes Earle. But over the years, his signature blend of folk, country, blues and daddy issues has proven to be a deepening well.

Recently, he’s been showing some real comfort, craft and depth in his expression, evidenced in how completely he carried the stage at his latest Orlando show (Feb. 17, Dr. Phillips Center) even with relatively modest framing. Performing in the raw with just one accompanist – an excellent Paul Niehaus on lead guitar and pedal steel – Earle shined. That command wasn’t always there. Now, after some time, miles and seasoning, his vulnerability has some real bite.

Besides a healthy serving from his recent and impressive two-album salvo (released only four months apart), his set was also crowned with some pretty knockout covers – a countrified take on the Replacements’ “Can't Hardly Wait” that was as good in real life as it looks on paper and a rendition of Fleetwood Mac’s “Dreams” that stunned on live pedal steel.

Despite the tall, tall shadow of his legacy surname, the junior Earle is a man now, his own man, a leading man. And the standing O he received in Orlando testifies to that.


But I came early to see opener Gill Landry, and for good reason. Despite his street busking background and his membership in Old Crow Medicine Show, his solo material has a very different pulse. Unlike that band’s ragged gang blitzkrieg on deep folk tradition, Landry’s balladry is a model of rural restraint. Although he did flash his picking skills about a half hour in, his performance mostly occupied the measured, mood-tinted terrain of his lovely upcoming self-titled album on ATO Records (releasing Mar. 3) and was essentially a live advance listening of it.

This is music that makes room to breathe, reaches for the chair and draws its whiskey in deliberate, unwinding sips. These are country and folk songs that aren’t too concerned about being new, trad or even punk, just honest and right. His music’s not the most blazing or sizzling of sales pitches, but spend some time with it and it’ll carry you home.

Regarding the venue, the shiny new Dr. Phillips Center is the city’s cultural crown jewel and the most buzzed about performance hall. This was my second show there, albeit in the smallest of the two theaters (the Alexis & Jim Pugh Theater). A swanky performance facility of cosmopolitan quality like this sure makes it easy to go all uptown and shit once in a while, but my native turf is a small independent rock club. However, through smart partnership with leading indie promoter Foundation (the booking muscle behind the Social and the Beacham), this major venue has already flexed its way into my orbit only three months into its existence.

There’s been lots of persistent doubt, at least in theater circles, about how much connection this performance palace will have to the real, ground-level cultural fabric of Orlando. In the music scene, however, nobody even bothered to harbor expecations. But the DPC is already proving itself with its small room. Forget the grand idea the building’s exterior exudes, the Pugh Theater is a great intimate music room, with everything warm and up close. While we’re at it, go ahead and slough off the stuffy connotations most of us have of the place because its rock music menu has proved surprising in its relevance and accessibility. Serious credit to their programming direction for making the DPC an instant player in the younger scene.