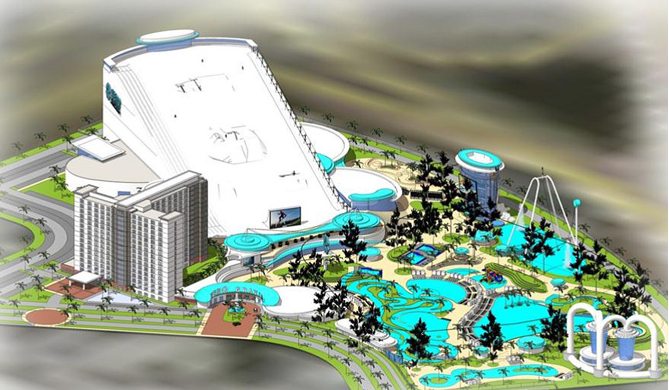 For the most part, living in Florida means forgoing certain sports, like snow skiing or snowboarding, but a new action sports resort that was recently announced for Kissimmee is here to help with that. The Xero Gravity Action Sports and Entertainment Resort is planned for a 75-acre site behind a Target store near the intersection of U.S. Route 192 and State Road 535.

The park will incorporate a number of action-sports activities including a 14-story ski and snowboard slope, a 25,000-square-foot indoor/outdoor skateboard park, a USA-BMX-sanctioned racetrack, two "sky-diving pods,” two 14-story water slides, an indoor dodge ball trampoline arena, a 140-foot-tall rock climbing wall, a white-water rapid river and zip lines crisscrossing the entire property. After a full day of those adventures guests will be able to stay in a 250-room Hyatt hotel with a rooftop pool and bar, take in a concert in a 2,000-seat amphitheater or escape from the sun while checking out the International Action Sports Hall of Fame that is planned for the resort.

Impact Data Source, a Texas based economic consulting firm, projects about $1.97 billion in taxable sales over a 10-year period coming from the sports complex.

The new resort might sound familiar to some, since a very similar resort by another group was announced for north I-Drive in March 2013. Plans for an indoor snow-skiing resort were also proposed for Cypress Gardens at one point, before it was turned into a failed theme park and then turned into Legoland Florida.

Like the I-Drive proposal, this park will feature an outdoor skiing and 9-lane snow tubing hill that will use artificial snow. Admission for the new resort is reported to be between $35 and $95.

This action sports park has been in the works since at least 2012, and its planned opening is scheduled for 2018. In November 2012 the Jacksonville-based Genesis Group announced that it had been tapped for most of the engineering services for the new park. In the press release making that announcement Genesis quotes Xero Gravity as saying, “… visitors will be treated to a lazy river zip lines, rock climbing, spa services, great food from a variety of restaurants, bars, a 10,000 sq. ft. retail shop, ice cream shop, swimming pools, hot tubs, best–in-class gym, cabanas, music/concert activities, competitions, training services, child-care with snow play area, special T. V. events by Red Bull and the Dew Tour, and much, much more.”

The property is being sold by the parent company of Westgate Resorts to a group of developers based out of Jacksonville. The developers say that the next phase is to secure funding for the $309 Million resort complex.

While many are still skeptical that the new resort will ever see the light of day, a reported $50,000 deposit was made on the site already. A second deposit that will secure the location is due on April 20. So it looks like we’ll know on 4-20 whether we’ll be snow skiing in Florida come 2018.