Orlando Weekly is moving to downtown Orlando next week 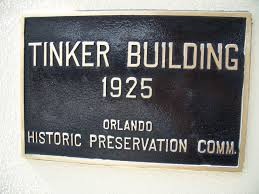 Monday, March 2, will be our first day in our new office building at 16 W. Pine St., also known as the historic Tinker Building. Our parent company, Euclid Media, purchased the building, which is on the National Register of Historic Places, last year.

Chicago Cubs shortstop Joe Tinker had the building constructed in 1925, and he used it to house his real estate business. He moved to Orlando to manage the Orlando Tigers baseball team. Over the years, the building has housed a hardware store, a sewing machine store, a pool hall, law offices, a hair studio. Rumor has it the building was once home to a speakeasy, as well. And yes, it's named after the same Joe Tinker for whom the endangered Tinker Field is also named. [UPDATE!: According to former director of broadcasting and sponsorship sales for the Orlando Magic Bob Poe, the Tinker Building was also the original home to the offices of the Orlando Magic. BALLS!]

Here it is, home, sweet home!