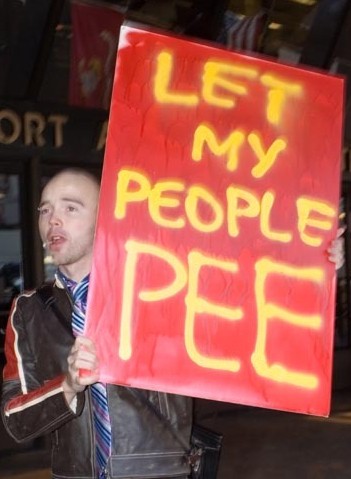 All of the symbolic caveats keep rolling in – that this is the next battle in the march toward LGBT equality, that the Florida Legislature surely has more to worry about than where people relieve themselves physically, that we've already achieved (as LGBT individuals) everything we need to with the advent of marriage equality – but it's almost a hollow victory when you consider that, in its first week, the legislature has already jumped into this socially conservative fight. At issue is HB583, an intentionally divisive bill meant to play on the paranoia of men who don't want their unattractive penises side-eyed. The so-called "Transgender Discrimination Bill" sailed through a subcommittee today with a remarkable majority vote – remarkable because it's hateful, not because we all know that the House is full of Republicans with sad agendas and very few answers.

The issue shouldn't come off as foreign or mystical to those of us in Orlando. Vice reporter Allie Conti wrote a startling piece last month about a Trans man being beaten amid the piss puddles of Wally's on Mills Avenue. You really should read it. And local Trans hero Gina Duncan has been fighting against this bill tooth and nail with Equality Florida, even launching a group called Trans Action to raise some kind of awareness to the complicated (but not so complicated it should be dismissed) issue.


Still, sad sack state Rep. Frank Artiles, R-Miami, decided that this would be the right week to fight this Very Important Battle that makes it clear that men are men and women are women, even if none of said men or women want anything to do with him, nor does he know what's going on beneath their clothes. Frankly, this is the lowest of base-jumping politics, and though there is a Senate companion currently referred to various committees, we're hopeful that cooler heads prevail. Mostly because many municipalities already have human rights ordinances that prevent this kind of discrimination, but also because you're talking about living, breathing people here. Plus, this kind of talk foments rage and depression among the youth of the state and country, resulting in suicide and murder. Ask Leelah. Oh, you can't.

“I was appalled today as I watched Florida Republicans stand united to write discrimination into law. Frank Artiles’ bill is a mean spirited attempt to bully Floridians, and places an undue burden on our businesses. This is a bigoted solution in search of a problem, and the Florida GOP should be ashamed of themselves," Florida Democratic Party Chair Allison Tant said today in a statement.