More on that viral blog going around about Florida's Koch Bros. killing the Everglades

March 06, 2015 at 4:15 PM
comment
There's a post going viral on the interwebs right now titled "Everglades to be killed this October by Florida's own Koch Bros." It's posted to the Daily Kos and Alternet, and it points out that the state has an option to buy a key parcel of land near Lake Okeechobee that's currently owned by huge sugar corporations. One of those corporations is U.S. Sugar, which is based in Clewiston, Fla. The other is owned by Florida Crystals, owned by a couple of Cuban-born brothers whose last name is Fanjul – and,  yes, they're frequently referred to as Florida's very own version of the notorious political bad guys, the Koch Bros.

Take a look at the map below, posted to the Daily Kos, which shows which sugar companies own what parcels of land around Lake Okeechobee. The land in yellow is owned by Florida Crystals; the land in Orange is owned by U.S. Sugar. That concentrated red and yellow block on the southwest side of the lake is the parcel of land in question: 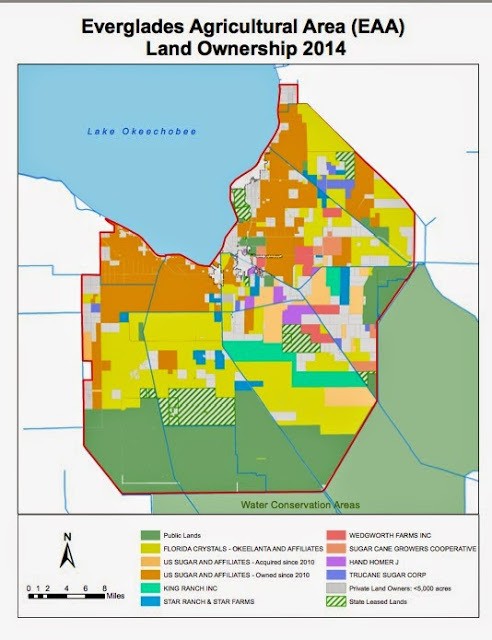 If the state purchased that acreage, it would keep the sugar interests from dumping toxic waste into Lake Okeechobee by creating massive surface reservoirs where waste water could be dumped, rather than allowing it to flow into the lake and its estuaries. It'd also allow the state to encourage the free flow of fresh, clean water into the Everglades and the Florida Bay.

Practically since Florida was settled, people have tried to manipulate the way Lake Okeechobee and its estuaries function – artificial flood control, drainage, levies and canals have been constructed around the lake to make the land surrounding it more useful, and to the south, much of the land – which used to be a direct source of fresh, clean water to the Everglades, which flowed from small tributaries that drained away from the lake – was converted to agricultural use. At one point, there was even an attempt to drain the Everglades and turn it into rich, fertile muck farming land. With agriculture comes agricultural byproducts – chemical runoff, toxic discharges and fertilizers that cause massive algae blooms and poison the water that makes its way south. The University of Florida's Water Institute just released a study recommending that the state accelerate its plans to restore vital watersheds around the lake to protect the Everglades from the poison flowing directly into it.

And the state Legislature now has a chance to buy a big chunk of land from U.S. Sugar and Florida Crystals, but – shocker – it's not jumping at it. According to the News Service of Florida, legislators are reluctant to buy the land which they have the option to purchase until it expires in October. Then, the land just goes back to being agricultural land owned by the Fanjuls, U.S. Sugar and other interests, and the dumping, algae blooms, nitrates and whatever else Big Sugar pours into the lake and its estuaries keeps coming.

Why is the Legislature dragging its feet on this? Here's what the News Service says:

The "I don't want to be guilty of trying to do everything for everybody" argument:

"There are a lot more significant issues right now," said Senate Environmental Preservation and Conservation Chairman Charlie Dean, an Inverness Republican who is helping lead Senate water-related efforts this session. "Life is going to change in five years. I don't want us to be guilty of trying to do everything for everybody. We need to spread this out."

"Buying up land we cannot care for, that falls into disrepair or becomes a breeding ground for harmful invasive species, is not a legacy I am interested in leaving," Crisafulli said while addressing the House on Tuesday. "If we truly want to honor our beautiful state, then we should spend these early years making sure we can maintain the 5.3 million acres of conservation lands we already own."


The "it's not the best use of dollars" argument:

Putnam said Tuesday that while he hasn't had a chance to review the entire 148-page university study, what he's seen backs his belief that the state needs to complete reservoirs north and south of the lake, but those areas don't require the U.S. Sugar land.

"I was opposed to the purchase of the sugar land under Gov. Crist," Putnam said. "It's the wrong land for a central flow-way. It's not the best use of dollars for Everglades restoration."

Want to send your legislators a message? There's now a petition you can sign to tell them to buy the land, build the reservoir and help keep Big Sugar from turning the Everglades into one big vat of poisonous, bitter tea.