After seeing the exhilarating heights that Torche prototype band Floor has reached on its triumphant return, it’s good to see some of those lessons of power and simplicity spill back over to the jumbo-jet doom-pop of Torche (Mar. 5, Backbooth). Their new album, Restarter, is one lean, mean mother, and their in-the-pocket set echoed that focus.

Not to start a war or anything but, though Tampa may have serious metal history, Miami’s got way better taste. As if having breakout stars like Torche isn’t enough, Miami’s heavy soil just keeps on turning up underground gold. The latest rock to shine was opener Wrong with noisy brute-rock that’s cranked with bludgeoning guitar chugs that evoke prime-era Helmet. It’s bare knuckles and torque, and it thrills. 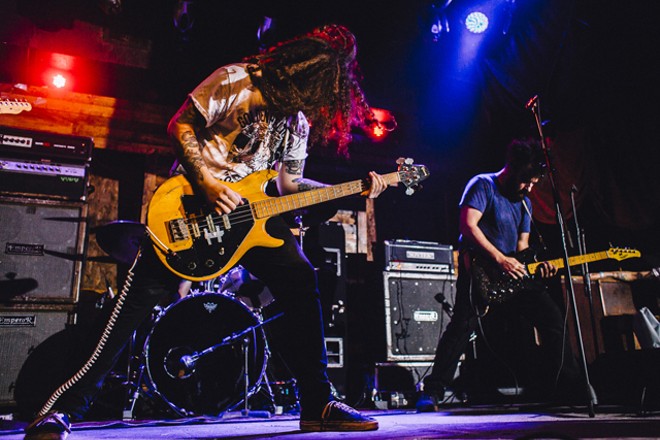 But demanding some due respect for Central Florida was Winter Haven’s House of Lightning. A band whose royal blood line includes Dove, Cavity and the aforementioned Floor, they deal in thrash, but it’s an expansive vision that, though stylish, has minimum frippery and maximum wallop. A calibrated balance of athleticism and rumble, they’re as well-tuned a thrash unit as it gets. With thicker ribs and deeper grooves than most of their peers, they’re more about drive and penetration than mere velocity. They’re called House of Lightning but, live, they’re all thunder.