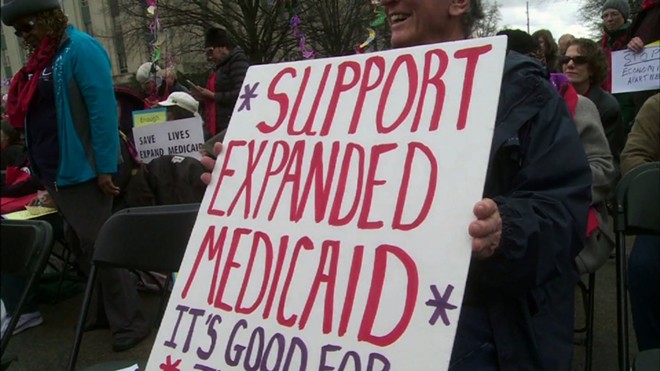 
Trying to build momentum amid continued opposition from House leaders, a Senate panel Tuesday approved a plan that would expand health coverage to an estimated 800,000 low-income Floridians.

The Senate Health Policy Committee unanimously backed a bill (SPB 7044) that would use billions of dollars in federal money to provide private health insurance to people who do not qualify for Medicaid. The proposal is an alternative to a straight Medicaid expansion that was contemplated by the federal Affordable Care Act, better known as Obamacare.

"Today is a watershed day in the Florida Senate and hopefully in the Florida Legislature,'' said Senate Minority Leader Arthenia Joyner, a Tampa Democrat who is a member of the committee.

The committee offered a bipartisan show of support for the plan, which also was hailed by groups ranging from Associated Industries of Florida to the League of Women Voters. But House Republican leaders flatly rejected a Senate expansion plan in 2013 and have not shown any indication of changing their minds this year.

"We're going to pay attention to what happens over there,'' House Speaker Steve Crisafulli, R-Merritt Island, said after the Senate committee vote. "Certainly they're going to have conversations over there that we probably won't be having over here. But at least somebody is having them. They're vetting the issue. And it's certainly their prerogative to do that."

Also, groups such as the Florida Chamber of Commerce, Americans for Prosperity and the James Madison Institute —- all influential with conservatives —- do not support the Senate bill.

The plan would create a health-insurance exchange, described by the Senate as a "marketplace," where low-income people would be able to choose among insurance plans. It would provide coverage to people who do not qualify for Medicaid and have incomes up to 138 percent of the federal poverty level. As examples, individuals who earn up to $16,000 a year or families of four with incomes up to about $33,000 a year would be eligible, according to Senate numbers.

Initially, people who enroll would receive coverage from health plans that are part of the state's Medicaid managed-care system. Later, if the state receives federal approval, they would choose among plans that would be part of an exchange run by Florida Health Choices, a marketplace program created by lawmakers in 2008 that has served relatively few people.

In trying to sell the plan, the Senate is closely linking it with ongoing questions about whether the federal government will extend a $2 billion program known as the Low Income Pool. That program, which is set to expire June 30, has funneled about $1 billion a year to Florida hospitals and other health-care providers who treat large numbers of low-income and uninsured patients.

Parts of the hospital industry would be hit hard if the so-called LIP program does not get extended. Insuring more people through a health-care expansion could help offset lost LIP money, expansion supporters say.

"We have an issue with LIP funding that is not going to go away, to the tune of $2 billion,'' Senate Health Policy Chairman Aaron Bean, R-Fernandina Beach, said.

"Please don't wait,'' Carvalho said. "Act now, and I would contend it is the right thing to do and the fiscally responsible thing to do for Florida."

But with the House opposition, Bean and Sen. Don Gaetz, R-Niceville, acknowledged it won't be that easy.

"It's going to be a difficult bill to pass,'' Bean said.