Downtown Credo, the pay-what-you-will coffeehouse with a social mission, has opened another space next to the Florida Hospital SunRail stop in Health Village. it looks pretty different from their College Park space, but the aim remains the same: good coffee and good community. Read more about their mission here; we gotta love a place that doesn't just caffeinate, but urges you by example to "shift from floating through life to making intentional decisions consistent with [y]our values." 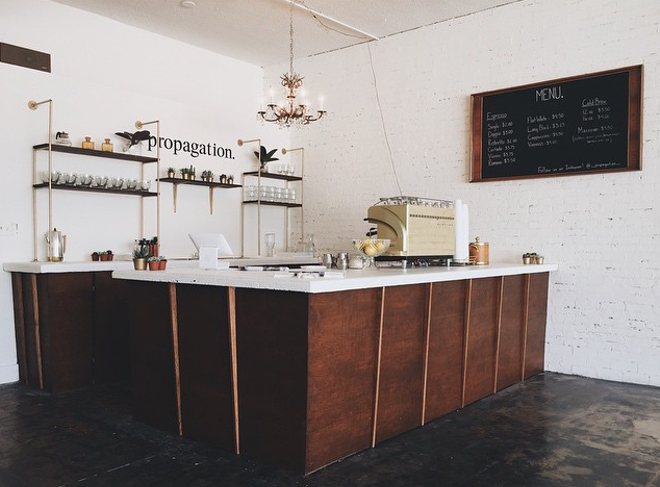 Another coffeehouse, Propagation (no website or Facebook yet, just Instagram), has opened in Mills 50. We told you about it earlier in the week, so we won't belabor it here, but we have been there three times since then and just can't get enough. Recommended.

R.W. Blue American Bar & Grill is shooting for an end-of-the-month opening in the same plaza as Stonewood Tavern and Panera Bread in Heathrow, serving "American fare with fresh salads, sandwiches, burgers, wings, ice-cold beer and wine." (Basic's not always a bad thing.) Also, "While dining you will be surrounded with 70-80" TVs" – guessing that's 70-inch or 80-inch, not 70 actual 80-inch televisions, but who knows?

Maddey’s Craft & Cru, a restaurant specializing in “New York style new Americana cuisine,” will open at a yet-to-be-disclosed location downtown. Their website promises, "We will use only local, seasonal, made by hand, food from the earth and made with love with a New York, 'You can get a lil of this and that' twist." The pictures on their Instagram look fairly delicious, so if that's any indication, good things lie ahead.

Look for a Noodle & Co. to open near Fashion Square Mall, and another one south of downtown. Expect Japanese, Thai, American (mac & cheese, buttered egg noodles) and Italian pastas.

Café Mineiro will be Orlando’s largest churrascaria when it opens in a 10,000-square-foot space near the Florida Mall sometime next month.

On I-Drive, McFadden’s Restaurant & Saloon opens for a sneak preview "Blarney Bash" on St. Paddy’s Day, which, based on this photo, will include bikini'd girls and Britney Spears-alikes dancing on the bar, beer bongs, and an actual leprechaun. What a refreshing lack of political correctness!