by Margie Menzel, the News Service of Florida 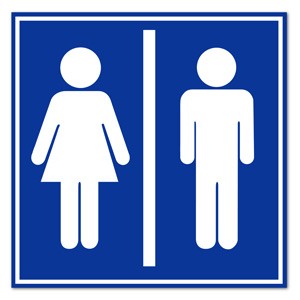 A bill that would ban transgender Floridians from using single-sex bathrooms that don't match the gender of their birth passed a second House committee Tuesday, following hours of debate.

The bill (HB 583) would make it a second-degree misdemeanor to "knowingly and willfully" enter a public facility, such as a bathroom or locker room, that is restricted to members "of the other biological sex." Maximum penalties would be 60 days in jail and a $500 fine.

The House Government Operations Subcommittee approved the measure by a vote of 7-4, mostly along party lines.

Rep. Frank Artiles, a Miami Republican and the bill's sponsor, said it is intended to address a Miami-Dade County ordinance that protects the rights of transgender people —- and that he calls "overbroad and subjective." He also noted that while 10 of Florida's 67 counties have passed such protections, the language varies.

"Of the 10 who have, Miami-Dade is the only county that allows men to enter locker rooms, fitting rooms and dressing rooms," Artiles said. "I attempted to fix this at the local level by giving an amendment to the local county commissioner, which was shot down. Today we are here because of local government."

Artiles also said he wanted to protect women and young people from those who would invade their privacy. For instance, he said, a supporter had told him about a son on a high-school swim team who had such an experience.

"There was a transgender boy allowed to go into the locker room and watch these young men undress," Artiles said. "She did not undress in front of them, but she gained access to the locker room. Yes, it’s disturbing —- and that's why I'm here today."

But dozens of speakers warned that the bill would expose a vulnerable minority to violence —- for instance, by forcing a man who has changed genders and dresses as a woman to use a male bathroom.

"Trans people experience the largest amount of violence," said Gabriel Garcia-Vera of the National Latina Institute for Reproductive Health. "By supporting this bill, you contribute to the structural violence perpetuated on this community every day."

Roberta Nichols, a transgender woman, said that half of transgender people are sexually assaulted in their lifetimes. "This bill will cost lives," she said.

Ashley Flattery, a victims advocate at the Alachua County Crisis Center, said there is no evidence of a problem for the bill to solve.

“This kind of idea that somebody is going to be assaulted in the bathroom by someone, and claim they have the right to be there because they are trans, is imaginary," she said. "It has never happened in my career professionally.”

"Women have an expectation of privacy," said Anthony Verdugo of Christian Family Coalition Florida. "My wife does not want to be in a public facility with a man, and that is her right. … No statute in Florida right now specifically prohibits a person of one sex from entering a facility intended for use by a person of another sex."

Verdugo cited a statement from a Miami mother whose daughter "was raped by a boy who says he is a girl who gained access to the girls' facilities."

John Stemberger, president of the Florida Family Policy Council, cited 2014 statistics from the U.S. Centers for Disease Control, showing that 96.6 percent of the population self-identified as heterosexual.

Stemberger said the bill would remedy a problem "that is emerging because things that were unthinkable a generation ago are not only thinkable, but they're being afforded the protection of the law."

Some who opposed the bill identified themselves as military veterans and Republicans.

"I fought for my country and I bled for my country," said Brenda Massarella, a transgender woman. "Today I’m fighting another battle —- a battle about what bathroom I am supposed to use. This time it’s not bullets being thrown at me, but accusations. Accusations that I am a pervert, or all kinds of things, which I am not.”

Jean-David Parlier, who was born a woman, is also a veteran —- and, he noted, larger than the average male.

"I have many stories of walking into a female bathroom and the fear that it invoked in women," he said.

Only one member of the Republican-dominated panel, Rep. Ken Roberson, R-Port Charlotte, did not vote along party lines.

"There's a lot of unintended consequences," Roberson said. "I don't see how you'd ever enforce it without putting a security guard in front of every public facility in the state of Florida. …I don't think it’s a statewide problem. I think it's a Miami-Dade problem that needs to be fixed in Miami-Dade."

Roberson also cautioned that, "We'd be opening Pandora's Box when it came to frivolous lawsuits."

His comment echoed an earlier warning from Nadine Smith of Equality Florida, who said the bill would open businesses to any number of legal challenges.

"They are liable. They could be sued," she said. "Now you look around this room and I guarantee, if you were told you must decide which restroom each person goes to, you're going to get it wrong."