Crazy on you: Scott administration orders employee to get medical evaluation for considering "climate change." Wow. 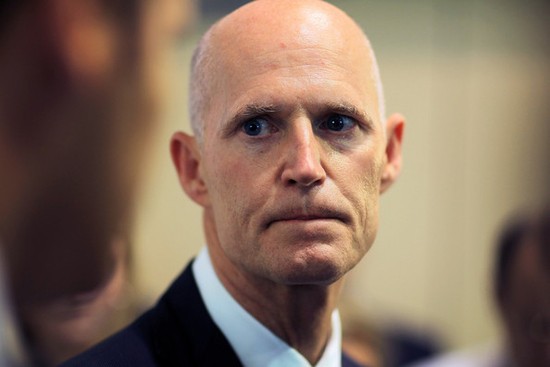 Image via Daily Kos
Perhaps you've been following all of the insane tornado of coverage about Gov. Rick Scott's climate-change denial, or maybe you're just too busy drowning in Miami. The gist is that Scott has told various employees of various state agencies that "climate change" is not a thing, nor is "sustainability," nor is "sea-level rise," though "climate variability" might be, he guesses. Of course he's no scientist, as he's admitted to nobody's surprise. He's just a simple businessman with the largest Medicare fraud case on record.

While it seemed that at first the administration was interested in some damage control, the damage only continues to get worse. A report from yesterday's Palm Beach Post describes the depth of this conservative paranoia machine. Things have gone from Bloggytown to Crazytown. Scott reportedly ordered longtime employee of the Florida Department of Environmental Protection to take time off and seek professional mental treatment for using the term "climate change" in reference to the failed Keystone XL Pipeline project, according to the group Public Employees for Environmental Responsibility.

"The complaint says that on March 9, Barton Bibler, a longtime worker for the Florida Department of Environmental Protection, got a letter of reprimand, was ordered to take two days leave and then was told not to return until he had medical clearance of his fitness for duty," the Post reports.

“If anyone needs mental health screening it is Governor Rick Scott and other officials telling state workers to pretend that climate change and sea-level rise do not exist.”

We wish we could say that this would tarnish Scott's alleged plan for a U.S. Senate run, but who are we kidding? In Florida, he's just adding some more idiocy seasoning to the suffrage pot. Gotta boil that base!