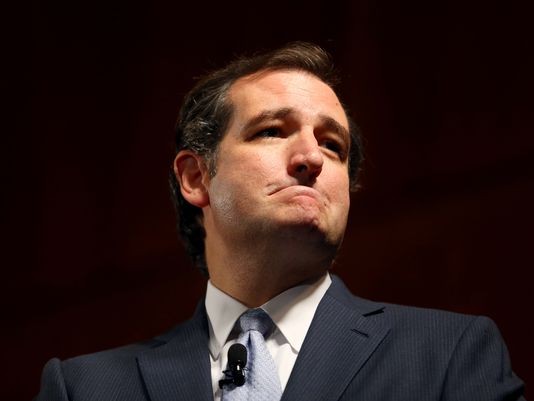 Like a secret bit of flatulence that nobody wanted to acknowledge, U.S. Sen. Ted Cruz of Crazytown announced this morning at Liberty University that he would be running for President in 2016 – he's the first official candidate – and that he would not back down on being mean and awful, no ma'am.

"Drawing on a stump speech he has developed in recent months, Mr. Cruz struck a tone of defiance and appealed to conservatives to 'imagine a president' who would repeal the Affordable Care Act, abolish the Internal Revenue Service, secure the border and forbid same-sex marriage," the New York Times reports.


Barring all the other drivel, the particular attention to the ACA is particularly indicative of a personal grudge. Remember that time that Cruz fake-"filibustered" for 21 hours against the ACA, making fun of his colleagues flat out? The Times does.

"Mr. Cruz has an evident flair for the theatric: His 21-hour speech on the Senate floor in 2013, delivered under the veil of a filibuster against the Affordable Care Act — except that the Senate had already scheduled a vote for later in the day — featured Mr. Cruz criticizing politicians in 'cheap suits' and 'bad haircuts,' and later reading 'Green Eggs and Ham' in its entirety. He compared his fight against the president’s signature health care legislation to the efforts of those who resisted the Nazis, ended the Cold War or started the American Revolution," the paper recalls in today's story.

This particular Republican obstinance hasn't stopped the ACA from working, however, as the U.S. Department of Health and Human Services obviated today. $7.4 billion was saved in 2014 alone in hospital uncompensated care costs, with $5 billion of that coming from states that expanded Medicaid, according to a the report.