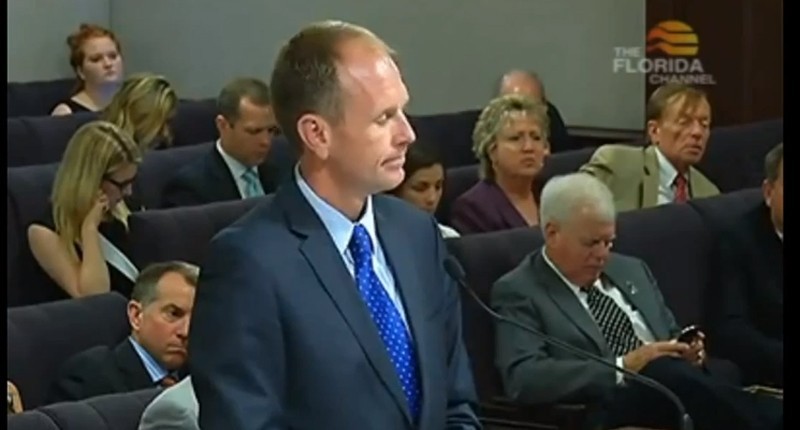 
Actually, we've been laughing for two days, as have about 150,000 other YouTube users, at this poor, poor Director of Florida Emergency Management Bryan Koon guy forced to stand in front of a Senate budget committee in Tallahassee and mind Gov. Rick Scott's mentally unstable edict of "don't say 'climate change,' fools!" That's Koon up there in the photo, and we feel kind of bad for him. But, in the short video, you will witness a number of washes of hilarity – some so hilarious that faces had to be covered – when state Sen. Jeff Clemens, D-Lake Worth, tries to draw the words of shame from his lips. As Raw Story reports, and you can see plainly in the two-minute clip, things go off like a gag reel.

Following some back and forth between Koon and State Senator Jeff Clemens (D), Clemens asked Koon if it is true that states need to have “climate change plans” to qualify for that federal money.

Koon agreed, saying it required “language to that effect.”

“I used ‘climate change,’” Clemens replied, “but I’m suggesting that maybe as a state, we use the term ‘atmospheric reemployment.’ That might be something that the governor could get behind.”

“What issue is that?” Clemens asked.

“The issue you mentioned earlier,” Koon replied as the senate panel broke into laughter at his obvious discomfort.