FDLE to charge officer for use of excessive force 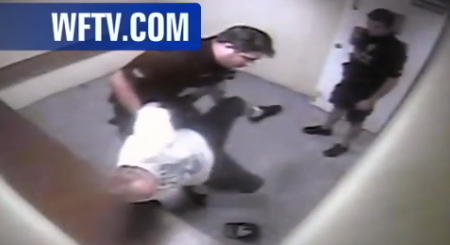 On August 12, 2014, Robert Liese was drinking at the Underground Public House on Orange Avenue. He racked up a $60 bar tab, but apparently he couldn't pay it. So the bar called the police.

When Officer Peter Delio arrived, Liese allowed himself to be handcuffed but struggled as he was put into the back of a patrol car. According to police reports, he told officers that he'd been in a car accident and needed time to get into the vehicle. He was pushed inside, which he said aggravated his pain and he thrashed around in the back of the vehicle.

When he was placed in a holding cell, Liese was allegedly belligerent, and Delio says he head butted a safety-glass window, shattering it. He then walked away from the window. Delio then entered the cell, walked over to the handcuffed Liese, kneed him in the stomach and threw him on the floor. The kick was so hard that it ruptured Liese's spleen. You can watch the video of the incident, posted by WFTV back in February, below:


A supervising sergeant determined that night that Delio's use of force was not appropriate. Liese has filed a $75,000 federal suit against the city for violating his civil rights. WESH TV looked into Delio's record and found that he had seven complaints filed against him between 2008 and 2013.

Today, the Orlando Police Department announced that the Florida Department of Law Enforcement will file charges against Delio for his actions. The department released this statement today:

On the night of the incident, the Response to Resistance was reviewed by a sergeant and was disapproved. This disapproval initiated an internal investigation by the Internal Affairs section. Chief Mina directed the FDLE to conduct a criminal investigation.

We support the judicial process and we take all allegations of excessive force seriously. Any questions regarding the criminal allegations should be directed to FDLE. Based on these charges, Officer Delio has been relieved of duty with pay.

Officer Delio has been employed with the Orlando Police Department since June of 2008.