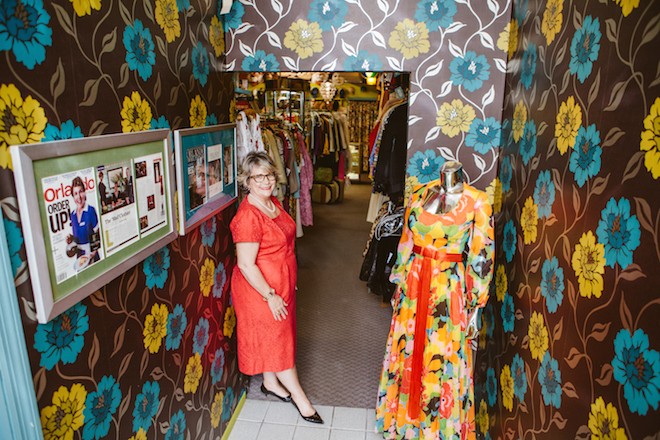 While many of Orlando’s newer vintage shops focus on mirroring modern trends with the wearable looks that inspired them, Lisa Smith of Orlando Vintage Clothing and Costumes turns heads worldwide with her stunning collection of authentic vintage that she’s amassed over the past 20 years in the niche vintage business. Her pieces have been seen on TV and in theaters, both motion pictures and playhouses, and employed by visionaries like Martin Scorsese and Sofia Coppola. So if you’re a local style fiend, your Orlando experience is incomplete without a stop into Orlando Vintage, where timeless pieces have been stopping hearts for decades.

“In between [working at] WDIZ-FM and opening the store, I worked for a friend named Linda, and she owned a consignment shop,” Smith says. “I started doing displays in there and started selling, and she had vintage in there, and I was really drawn to the vintage that she had. To supplement my income, I started doing shopping, and I started gravitating towards vintage pieces. Then I hit a big estate in Winter Park, an estate sale. It was actually an auction, and they were auctioning off a closet full of vintage stuff, just boxes full of stuff. I bought so much stuff, I had to go back and reload my car. It wasn’t a large car, a little two-door Saturn. But I started accumulating stock, and I eventually ended up opening my own store in College Park.”

That was in 1995, a time when Orlando was a popular film site for moviemakers whose costumers quickly found their way to Orlando Vintage. Smith became a reliable source, and when the local work petered out as fewer production crews came to town, the costumers kept consulting with Smith and requesting items shipped to their studios in major movie hubs like Los Angeles and New York. It quickly illuminated an alternate income stream for Smith.

That early work led to an unexpected career in costuming, almost like Smith serendipitously thrifted her own destiny.

“It definitely gives me great satisfaction to see my stuff on the small screen and the big screen,” Smith says. “For me being in the business 20 years, that’s what I wanted. From the beginning, I wanted to do big stuff. I wanted to be on big productions, and as much as I still love the retail store, that’s my bread and butter. The productions are like my cake.”

With her future in vintage secured, Smith broadened her visions and her store. She more than doubled the size of her store when she moved to her current location on Fairbanks Avenue 16 years ago. Then around six years ago, she bought out Allied Costumes and expanded her stock of theme party garb, crowding the front room of her store with costumes not necessarily tied to the original vintage theme.

“I had a pair of go-go boots I rented out so many times, I displayed them in the office on my wall because they probably made me a ridiculous amount of money,” Smith says. “But they started to deteriorate.”

“Deteriorate” is basically a curse word in the vintage world, where people like Smith are doggedly dedicated to restoring clothing. In her shop, her pieces date back as late as 1880, but these items are not displayed on her racks. She stores them and shows them to collectors who set up appointments to view these garments, which are more like ancient relics than fun throwback fashions.

For 15 years or so, Smith has displayed her vintage gems in New York annually, which helps her to keep visible in that hip market where her clothes inspire designers like Tory Burch and Donna Karan. Although retro fashion that draws from authentic vintage remains popular, Smith doesn’t carry reproductions in her store the way shops she admires like La France in Tampa do. She’s not against it, but who has the time to find modern designers to take the store in a new direction when you’re working on major films, running the shop and keeping quality, time-honored trends alive?

“I think I’m preserving historical pieces,” Smith says. “We do restoration. When I get a piece in, we clean it, we repair it, we research it. We authenticate it. So it’s not something that’s thrown out there with little thought. The process of putting it out there like it’s a treasure, I think, has definitely made my work more significant. Because frankly, I think other people don’t respect it, and I think I always gave the fashions the respect that they deserve and the respect that the original owners had when they purchased them – it’s why they bought them in the first place and kept them for so long, because the clothes were treasures in their lives.”