The determined inventiveness of the community that inhabits the Space Station – a sprawling workshop, art studio and venue located in a College Park warehouse (2539 Coolidge Ave) – sustains the DIY space through creative labors of love. Local artists Aaron Sarkisian and Maxwell Hartley don’t live at the Space Station, but they might as well be astronauts doggedly logging hours in their separate studios, where at all hours of the day Sarkisian runs his screen-printing business and Hartley crafts his woodworking marvels.

“It’s cool when the place is kind of built around work,” Hartley says. “I feel like the success that we’re having is based on how we support it. We support this place based on the work that we do out of it. So it’s really evident how it’s sustainable.” 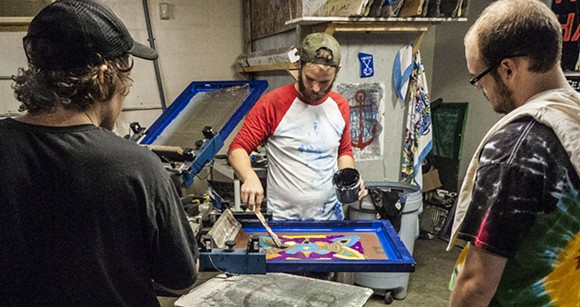 What started about three or four years ago as a communal practice space for local bands based out of Longwood eventually became too inconvenient when each stakeholder moved closer to downtown, and after time, Hartley and Sarkisian sought out a new base closer to home to eliminate the commute. They found the current Space Station location and were all moved in by May 2014. In November last year, they celebrated a grand opening with Space Station Fest, and now they’re seeking to build upon that event this May with a party that embraces multiple aspects of Orlando’s creative scene, as well as showcases the defining culture that keeps the Space Station thriving.

Live at the Space Station
featuring Annie Sewdev, Scab and Nick Sinnot
Update Required To play the media you will need to either update your browser to a recent version or update your Flash plugin.

“In November, we had Space Station Fest, which was kind of our opening, where we officially made it known that we were here and we were comfortable with the look of it,” Hartley says. “We had to do some build-out. We’re definitely planning another one. Probably in the beginning of May. It’ll be another weekend fest where it’ll be Friday, Saturday and Sunday, all day people hanging out, getting involved, printing, definitely bands playing. We would like to have vendors out here.” 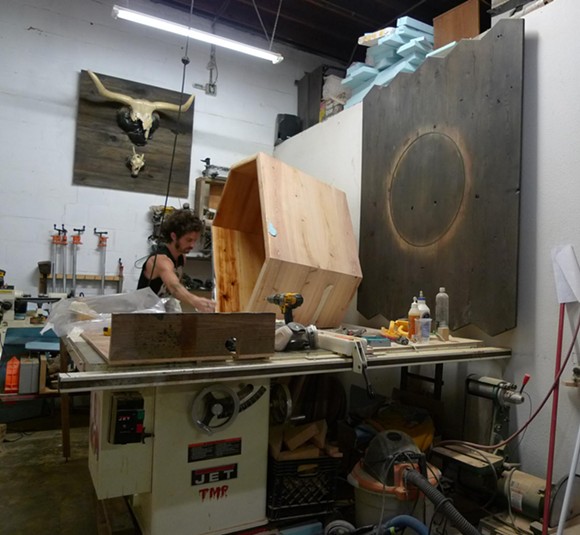 There’s ample parking, and due to the noise ordinance, all live music must stop by 10 p.m. The early hour means that showgoers can enjoy the scenic warehouse setting at sunset, a bonus in addition to the rad layout of the Space Station, which features bold colors and concrete floors winding around from Sarkisian’s massive screen-printing studio, through a communal hangout area that boasts a full kitchen and vinyl library with turntables, into the considerably open space of the music room and out the back through Hartley’s woodworking studio, where bands load in. It’s an inviting space capable of igniting at any moment with new energy that takes the day in a different direction. And since Sarkisian and Hartley seem constantly to be operating with their heads down over the next project, sometimes the shows booked at the Space Station sneak up on them or even catch them off-guard. But in a good way.

“It’s the most amazing feeling when someone books a show here and we’re all in a panic, like, ‘There’s a show tonight?!’ We didn’t even know!” Hartley says. “Someone didn’t remind us or something, and people just start showing up, and all of a sudden, there’s this amazing band playing that we’d never heard of. We didn’t see it coming. It’s like they’re playing in your living room, kind of. No one lives here, but we’re here all the time. And then our space gets invaded by really awesome talent.”

This week, there are two shows at the Space Station: Great Results, Harsh Radish and Crit at 7 p.m. Sunday, March 29, and KnifeHits, Dzoavits and Neat Freak at 3 p.m. Monday, March 30. If you’re of age, you can bring your own beer. While they’ve never had any trouble with police, officers have occasionally investigated the venue during events. So long as it continues to gain such positive momentum, the Space Station presents an opportunity to catch gritty, physical music in what’s becoming one of the city’s most promising alternative venues. Additionally, for inquisitive folks, it’s a chance to scope the studio space. Hartley says the Space Station welcomes new collaborators, and inquiries about the space can be made through their new website, lowerearthorbit.com.

“We’re definitely willing to collaborate with people,” Hartley says. “I want people coming in here, getting involved however possible.”