VIDEO: DeLand songwriter Mic the Prophet on Off the Avenue

In 2012, DeLand native and Stetson University alumnus Mike Furlong got tired of waiting for the right pieces to fall in place to form an active, touring, recording band. He decided to go solo as Mic the Prophet, trusting his crap van to take his one-man act on Florida's roads from Tallahassee to Key West. Trained as a drummer, he taught himself to play guitar and found he could more easily drum, strum and sing thanks to that initial percussion core. "It was a lot of fun," Furlong says. "But scraping by and getting by on just hustle wasn’t working. I was lucky enough to have friends and fans that really believed in what I was doing, and thanks to them, I raised a bunch of money on Kickstarter, recorded a studio album, and held open auditions for the band as it is now."

His new backing band is called the Bear Necessities, and they joined Furlong in January to record his upcoming debut album, Mic the Prophet, due out April 7. They also joined him at North Avenue Studios to perform two new songs for this month's Off the Avenue session, "Dry Bones" (above) and "Perennials" (below) and will add bounce to his album release party on Saturday, April 18, at West End Trading Company in Sanford. Check out the videos and read on to learn more about Mic the Prophet and his earnest, folk-pop sound.

Do you have any gear that helps you achieve your sound?
The center of my sound is my guitar: a Martin D-1E Dreadnought. For you laypeople, that basically means a big-ass, loud, full and bass-heavy acoustic guitar. I touch that just a little bit with some digital and analog reverb from lots of different places  (amps, preamps, mixers, whatever is around), but I try to keep it sounding pretty natural. The way I voice chords is more important to my sound than any instrument, and as long as there is plenty of bass, most of my tunes sound pretty good! My only other preference is singing into an SM57 instead of an SM58.

What’s the best story you’ve got about a piece of gear you play with?
I play live as a one-man-show with a homemade kick drum. People have complimented me on it and said it’s really cool, but I built it because I didn’t have the money for a real kick drum. It's made from a crappy thrift store suitcase and some cheap brackets from the hardware store. Luckily, I had my old kick drum pedal from my first drum kit laying around in a closet, so it worked out. Later on, I sawed a hole out of the front and put a KickPort in there, and it honestly sounds really good now!

Who do you love most in music right now?
The Avett Brothers: They somehow fit a real rock and roll band inside of an old-time southern family band. “Unique” is a word that gets thrown around a lot, but these guys really are. Damien Rice: I have a lot of respect for Damien Rice’s ability to take very simple songs with simple lyrics and impart incredible amounts of emotion into them. The Decemberists: Nobody tells a story like the Decemberists do. In a world where lyrics and words must fight to survive against dance tracks with seven words in them, the Decemberists are heroes. Andrew Bird: Andrew Bird is prolific. It seems like he puts out an album every year. His band makes all the records live in a room together, and they just knock it out of the park every time. Jason Mraz: I should probably catch a lot of shit for this one among my more snobby musical friends, but the lyrics and music don’t lie. The man is a hell of a songwriter and arranger, if you get past the few really radio-designed songs that pay the bills for him.

Who is the best band you’ve ever seen live?
Elton John. He’s a legend for a reason.

What do you think is important in a live performance?
The connection and conversation aspect. Your fans need to realize you’re a person, beyond being a performer. Anyone who has seen a live show of mine, solo or with a band, knows that I talk to audiences, even sometimes individuals, between songs. Sometimes a crowd just needs some waking up because you’re the first one on the bill and none of them have ever heard of you, but whether they have heard of you or not, it turns the show into a two-way street. You talk and sing, they talk and sing back.

What’s your favorite city to play in?
Can’t really pick one city, but I really like the Florida Keys. I’ve had really good experiences traveling and playing down there, and it’s low stress. Plus I love to fish, and I always get a chance to while I’m down there. 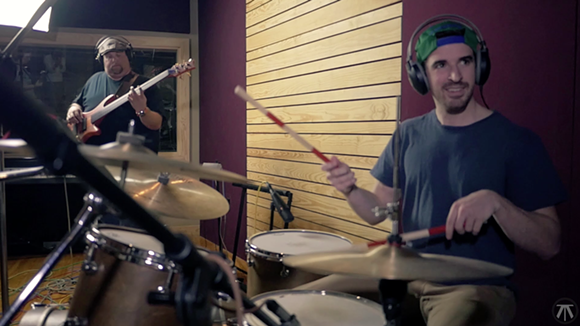 What’s your favorite Orlando venue to perform in?
There are a lot of fantastic venues in Orlando, but I have a soft spot for the places I’ve played for a while. Orlando Brewing has been really good to me for a long time, and I love playing shows there. They have a commitment to only original music that is really cool.

What the fuck is wrong with the music industry?
The same thing that is wrong with the rest of the economy. Big players get big and then try to close the roads they took to the top behind them. But all that is changing, and although it’s really hard to survive now, I think things will continue getting better. Sometimes people can get negative about the state of the industry, which is understandable, but I try my best to stay positive.

What album have you listened to more than any other album? What keeps you coming back?
Goodbye Yellow Brick Road - Elton John (1973). Legendary artist, fantastic album. It’s hard to beat that kind of songwriting.

Which comes first: the lyrics or the music?
I think things come at different times, but lyrics are definitely the last layer of a tune. I find that music comes quickly, and lyrics come slowly. I always finish by tinkering with lyrics, and it takes a long time. There’s a lot more there than people think, and a big part of growing up as a songwriter is realizing that. A lot of people get pissed when their favorite bands or artists change the way they write songs, but why would you want them to make the same album over and over?

Explain the meaning behind  one of your songs.
“When I’m Dead,” from my upcoming album: This song tells a story I experienced while in college. I went to Stetson in DeLand, and DeLand has a lot of street preachers, especially for its size. A lot of people were always angry at them for yelling at people in cars, or passing out tracts about going to hell, but my old roommate and I were always just more curious about what motivates people to do that. We decided to just go try and talk to them. The song is a reflection on the experience. It’s really about death and uncertainty; the tag line of the chorus is “I don’t know what’ll happen when I’m dead.” I’ve had multiple people curse at me or leave bars where I was playing because of this song, but I don’t see what’s so offensive about telling the truth. I believe in God, and I count myself as a religious and spiritual person, but I think that music is about telling it like it is. And I don’t know what will happen when I’m dead; I feel that, so I sing it.

What’s the best live music video you’ve seen?
I don’t know if it is the best I have ever seen, but this one is pretty damn good. I love the Tallest Man on Earth because of how much he is able to do solo. What a compelling performer.