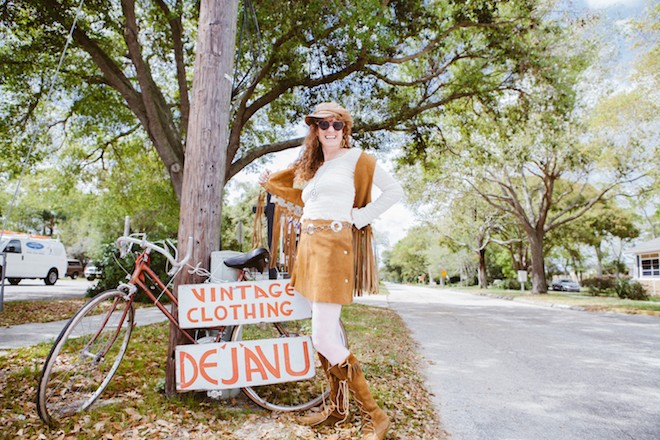 It’s no surprise that the owner of Déjà Vu Vintage Clothing & Accessories is as colorful as the gorgeous array of clothing and costumes she collects, rents and sells in her store. But despite 30 years of helming the store, Robin Krentcil, known affectionately by customers and friends (which are often one and the same) as “Red Robin,” seems still in shock by how her life turned out.

“You can look at it from different angles,” Krentcil says. “It was fate or luck or divine intervention. I was not in the fashion industry at all. In fact at the time, I had just been laid off. I was an electrician’s apprentice. And I didn’t really care for that, either. I had been wearing many hats before that point, so when the woman who owned [Pink Flamingo] needed me to help her one day, I had sales experience. So I went in, and she took off for the whole day, and I made a fortune that day for her. She hired me on the spot.”

Three decades later, the clothing that was trendy when Krentcil opened Déjà Vu in 1985 in the old Pink Flamingo space across the street from Lake Ivanhoe is just beginning to be regarded in some schools as vintage. Irrefutably, ’80s and ’90s nostalgia is strong and will only get stronger, and the bright fashions of that time are slowly creeping into Orlando’s vintage stores. However at Déjà Vu, you’re much more likely to fall in love with authentic vintage offerings from the ’40s, ’50s, ’60s and ’70s, on back to the ’20s and even earlier.

“Right now, burlesque is very popular and has been gaining momentum, especially I would say in the past year or two,” Krentcil says. “So, you’ve got a lot of women looking for ’40s, ’50s, ’60s pin-up looks, which is nice, so there’s that clientele looking for this stuff. Now in the mainstream fashion world, ’70s is coming back, so you’re going to have all of your psychedelics and bold prints. … Fortunately for me, there are people who do want the authentic and not the vintage-inspired.” 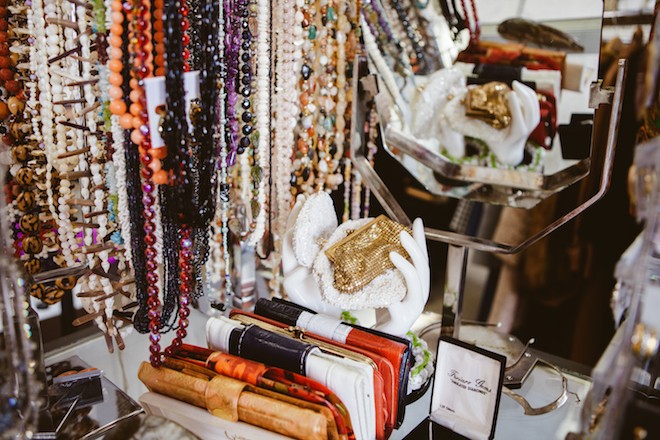 Déjà Vu remained in Ivanhoe Village for the bulk of its history, but in 1988, she had to relocate, and she had her eye on a specific space in a zone of the strip that would five years later become the thriving “Antiques Row,” a hip destination in the ’90s especially, Krentcil says. There was a problem, though. The whole strip was barren because it wasn’t zoned for retail. Once again fate stepped in, and luckily, Krentcil’s boutique charmed the city official pushing the pencil on her paperwork.

“I had to go down to the city to get a permit for that space, and the girl pulls out her index box, and she’s flipping through the index box, and she goes, ‘Uh, all those buildings are zoned for the hospital,’” Krentcil says. “That whole area was zoned hospital. I was wondering why every single property on that side was empty. I could’ve picked any space I wanted. And I looked at her, and I said, ‘Well, that can’t be, there was a business in there before that left that wasn’t hospital.’ She was like, ‘Well, what shop is yours?’ and I told her it was Déjà Vu Vintage, and she was like, ‘Oh, I know your store!’ She took her pen, added a slash mark to the zoning ‘hospital’ and included ‘retail.’ And that’s how that whole area got to be retail as well. That’s a little known secret. I just let the cat out of the bag.”

A little more than a year ago, Déjà Vu moved again to its current location (1210 Michigan Ave., Winter Park), off 17-92 near Orange Antiques Mall and Eat More Produce. While it was a bummer to leave Ivanhoe, Krentcil says the culture is shifting, moving more toward bars and restaurants and away from the antiquing culture that used to be at the forefront of the strip.

“It was really difficult because there’s not that many locations for small businesses that are affordable, that aren’t handled by property management companies that charge for every unbelievable breath you take,” Krentcil says. “And I almost took a space on the avenue up the road a little bit more, but I wasn’t comfortable with some of the terms of the lease and in the final minutes, I found this space.”

She’s certainly gotten comfortable in her new location, where she has a wider selection of men’s clothing than most other vintage shops in the area and a back room overflowing with retro costumes used by local theaters, the theme parks and in movies. While selling the clothes is what puts clothes on her back, though, Krentcil also emphasizes that she buys vintage clothing. So if you have a closet stuffed with throwback threads, Déjà Vu could be a great place to deposit it, make a little money and pay it fashionably forward.

“Please don’t dispose of your vintage clothes and costume jewelry,” Krentcil says. “The other day I heard on TV, this actress was cleaning out her storage closet, and she was like, ‘Who would want these aprons? I threw them away.’ I was like, ‘Honey. I want your aprons.’ Things people don’t realize when they’re cleaning out an estate, like grandma’s jewelry never seeing the light of day under the bed. This is stuff that I buy. You’re not going to have a trip to Europe out of it, but you’re helping a small business, and you’re putting it back out into the world. Someone’s going to love it, treasure it and breathe a whole other generation of life into it.”