At last night's Orlando appearance (Mar. 25, Will’s Pub), L.A.’s Cobalt Cranes proved one of those well-built and locked-in rock bands that’s great to see and hear in action. As a robust unit with two strong singers and front presences in Tim Foley and Kate Betuel, this diamond in the Lolipop Records mine is a very complete band with a chiseled vision.

Although it’s not entirely complete to call them a psych rock band, it’s definitely not inaccurate. Perhaps it’s because they’re really more than that, they don’t just coast conveniently on aura, posture or nominal style signifiers to pass. No, their charge is led by decisive musical intent. There’s plenty of alluring murk and atmosphere in which to swim, but it’s powered by solid architecture and punctuation. This isn’t just ambience, it’s music – stout, seductive rock music.

In total and abject contrast, local opener Common Man was a goofy scramble cluttered with all manner of ingredients but little discernible recipe. Nothing in their schema right now makes it clear where they’re coming from or where they’re going, and that can only mean that they’re lost in space. 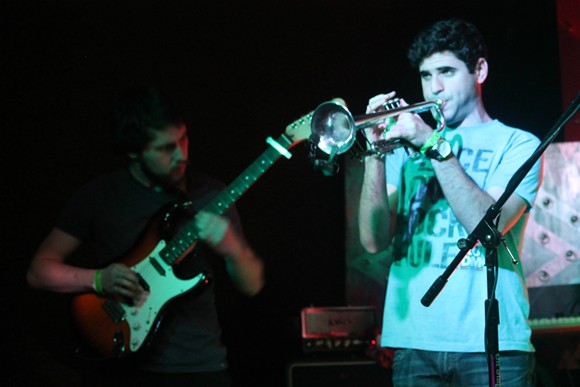 Although literal to the point of being retro, Orlando’s Arc Pilot was at least listenable. A straight throwback to 1988 with a singer who echoes Robert Smith and Peter Murphy, their moody college-rock sound plays like a lost episode of 120 Minutes. They don’t pull from quite the typical landmarks of the ‘80s that today’s kids have deemed fashionable, but it’s nice stuff done with faith and skill.