UCF faculty group speaks out against guns on campus, wisely 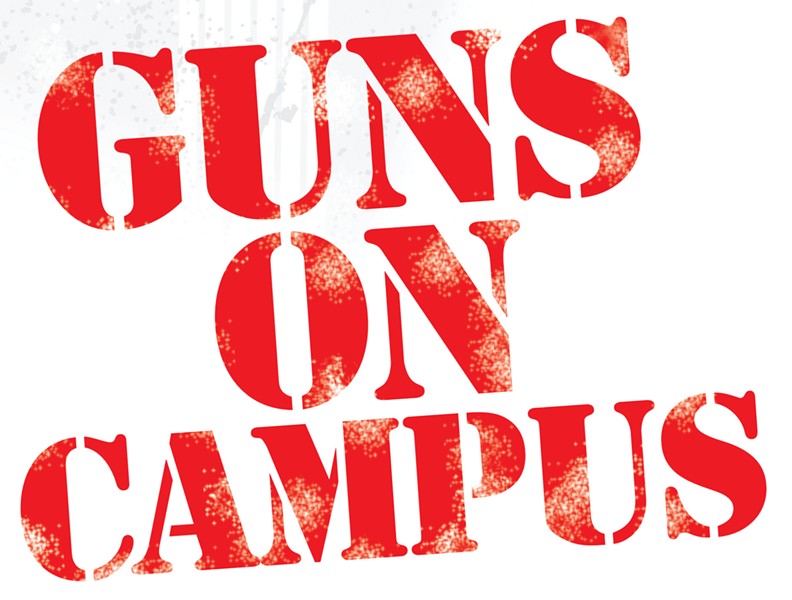 Today, we received a message from the University of Central Florida chapter of the United Faculty of Florida regarding the move to allow concealed carriers of firearms to bring their death-makers onto campuses, because that will protect them from mass shootings, for sure. There were a couple of key points we took away from reading the group's statement, which we'll share below, but this is probably the most salient of them.

"25). Most young people are neither 'good' nor 'bad,' but are often confused, use poor judgment, make errors, get upset over seemingly trivial things, etc. Furthermore, arming students is not a proven way to reduce the numbers of mass shootings. If students brandish firearms during a mass shooting, they will likely shoot innocent bystanders or be shot by police who mistake them for the shooter."

It's this follow-through rationale that really has us pondering why our legislature, or any legislature, is not considering the consequences of appearing to be a shooter when there is another shooter in the room or on the campus. The National Rifle Association continues to stick to its "good guys shoot bad guys" mentality, but, in college, how many people look like good guys, and how many look just bad after a night out. Seriously. If you want to see our previous coverage on the issue, go here.

The group is suggesting that these amendments be made to the impending legislation from the House and Senate that will make the NRA happy and students and teachers scared for their lives:

“Right to Vacate” Provisions
HB 4005 and SB 176 must include provisions allowing students, faculty, and other employees to choose to leave any environment where firearms may be present without question or penalty. Because firearms are inherently dangerous and constitute a threat to life, the right to vacate must be enshrined as a legitimate form of self-preservation and necessary form of self-defense. Therefore, we require that the following provisions be added to HB 4005 and SB 176:
- Students can leave any class without disciplinary action or penalty if they feel at risk in the presence of possibly armed persons.
- Workers, including faculty, can leave their workplaces without disciplinary action or penalty if they suspect that an armed person has entered their classroom or workspace.

And here's the full resolution, which you really should read if you have a minute and a heart:

UFF-UCF Draft Resolution on Allowing Firearms in the Classroom (Re: HB 4005 and SB 176)

HB 4005 threatens the rights of every individual at a college or university. The passage of this bill would create an atmosphere of fear, suspicion, and intimidation. Allowing guns in the classroom would create a profound threat to our entire educational enterprise by instilling a permanent state of pre-occupation in which teachers and learners would be distracted from the lessons at hand. Those with firearms would be preoccupied with concerns about whether their firearm is properly secured, whether someone else poses a possible threat, and whether they should respond to that possible threat with a firearm. Everyone else would be preoccupied wondering which other people have firearms, whether these firearm are secure, whether the people with firearms are in their right state of mind, whether people with firearms will mistake an environmental element (such as a loud noise or a disturbance in the hallway) as a threat that requires a firearm as a response. Educators and students are not reassured by the presence of firearms in the classroom. Far from it, we are terrified.

Colleges and universities are places in which safety is required to discuss difficult and controversial topics, such as religion, race, politics, and sexuality. The presence of firearms during such sensitive discussions raises the stakes considerably. Passions get activated in these situations. As educators, we want people to use their words, not their firearms, to deal with their thoughts and feelings.

As faculty members at the nation’s second largest university, we are terrified by the possibility of firearms in our classroom. Not only are we afraid of the tremendously increased likelihood of being shot at our place of work, we are also afraid of our students being hurt by accidents and mistakes involving firearms.

While advocates for this bill have argued that the need for self-defense justifies introducing in the classroom, this argument makes little sense in light of the following facts:

1. At a college or university, it would be nearly impossible to encounter a situation in which a “good guy with a gun” stops “a bad guy with a gun.” Most students at 21 have not reached mental maturity (the frontal lobe of the brain, which is the seat of reason, does not finish maturing until about age 25). Most young people are neither “good” nor “bad,” but are often confused, use poor judgment, make errors, get upset over seemingly trivial things, etc. Furthermore, arming students is not a proven way to reduce the numbers of mass shootings. If students brandish firearms during a mass shooting, they will likely shoot innocent bystanders or be shot by police who mistake them for the shooter.

2. Students have a much higher than average rate of suicide, alcoholism, and emotional problems than other people. Allowing them to be armed is to put all of our lives in greater danger. Here are a few statistics:

Many of the most staunch firearm rights advocates have recognized the danger posed by the combination of firearms and mental illness. In an environment with as much mental illness as colleges and universities, the risks are simply too great to ignore.

3. There is virtually no way to use a firearm effectively in a classroom setting, even if there were an active shooter present. The chances of hitting another person are far too great. Beyond that, the likelihood that a concealed weapon could be misused in an educations setting is far too real. Students themselves say that they and their peers are often hungry, angry, or tired, that they lack good judgment, and that they have accidents with less dangerous items all the time.

4. Universities could be liable for damages if handguns are used to hurt or threaten people on campus.

5. This bill is a re-wording of a “model bill” that was written by ALEC, which was co-chaired by the NRA. See http://alecexposed.org/w/images/9/90/7J1-Campus_Personal_Protection_Act_Exposed.pdf. We believe that schools should be free of outside pressure from political organizations that seek to advance their own interests without regard for the wellbeing of students and faculty.

Mass shootings in America kill roughly 35 people per year. That number is far too high and we should seek ways to lower it. Nevertheless, it is a very small number compared to the vast numbers of people killed and wounded by the proliferation of firearms. This bill would increase the proliferation of firearms to one of the most vital and sensitive areas in civic life—the classroom—thereby greatly increasing the dangers posed to students and faculty as well as to the entire enterprise of education itself.