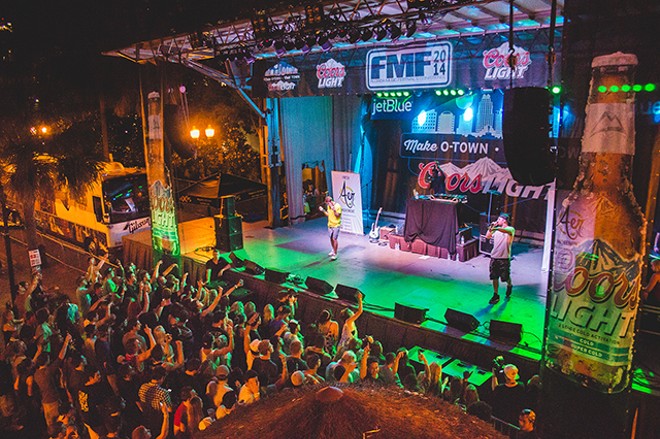 Florida Music Festival (April 16-18) made a huge decision this year that's frankly intriguing and sincerely pretty cool. In keeping with the festival's original focus on promoting unsigned acts: They cut out the headliners.

So this year (sorry if you had a late '90s alt-rock joke dusted off and prepared), music snobs can't snicker at some past-their-prime band with top billing or roll their eyes at skewed lineups that in the past paired trending, more adventurous regional and local bands with mostly irrelevant national bands guilty of recycling earworms from bygone eras. According to the festival, this decision not only eliminates some of the criticism (not to mention costs) that possibly negatively impacted attendance, but it also puts the spotlight back on up-and-coming talents who can benefit from the exposure and other networking aspects of the conference, including hearing keynote speaker Jonathan Mayers, one of the original founders of Superfly Presents (Bonnaroo co-founders) on Saturday, April 18, at Dr. Phillips Center for Performing Arts. (Full schedule here.)

But that's not the only thing that's different this year. Here's the other big shift: All the shows at the festival are free. The industry component to Florida Music Festival still costs money and requires registration (that information is here), but there will be no cover charge to see the music. That means all the awesome local bands you've been reading about on Orlando Music News but maybe haven't had the time or cash flow to check out yet will be stacked and assembled into exciting showcases that won't cost you a dime. Fucking rad.

Do your homework so you don't miss out on some of FMF's coolest showcases, including a beefy lineup curated by Swamburger on Friday, April 17, at the Social, which spans hip-hop, punk, rock, funk and jazz and looks deep and dizzying from the talent listed (featuring Jorok with AmIAm, the Welzeins, Acey & DiVinci and tons more). (RSVP!) The next night, our own Bao Le-Huu puts together his second showcase for FMF on Saturday, April 18, also at the Social. This year his picks honor some time-tested favorites like Eugene Snowden and the Woolly Bushmen as well as some curiosity-rich new acts like Waxed (this will be the Flashlights side project's debut show). (RSVP!)