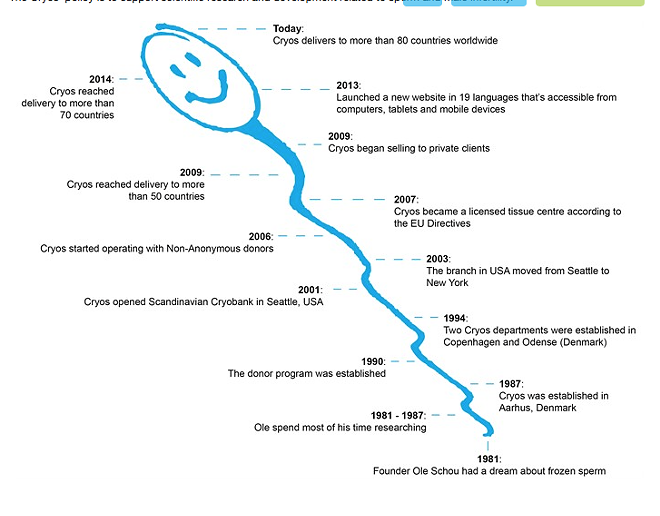 The world’s largest international sperm bank, Cryos International, opened in Orlando yesterday. The company, which was founded in Denmark in 1987 after founder Ole Schou “had a dream about frozen sperm,” recently relocated from New York to a spot just outside the UCF campus and Central Florida Research Park – the perfect place for a sperm bank, given the student population in the area. In fact, Cryos tells us that it’s already received more than 100 donor applications.

Cryos is actively seeking donors now. If you want to donate, you must be mentally and physically healthy, between the ages of 18 and 30, and 5 foot 9 or taller. Donors can choose to be anonymous, but non-anonymous donors (those who don’t mind of one of their offspring learn the donor’s identity after reaching 18 years of age) are preferred.

Things you may not know about sperm donation:

+ Your sperm needs to be tested to be of high quality before it’s approved for use, and you have to make three “deposits” at the sperm bank that it can test to see if it meets “approval criteria.”

+ You have to pass a psych evaluation to be approved.

+ Approved donors need to make 10 deposits before they complete a “batch” of sperm, which is then quarantined until the donor undergoes physical examination.

+ You can order frozen sperm for home delivery, and you can even order a home-insemination kit to go with it.

+ You can search for sperm donors online, and some of them even include baby pictures.

+ Prices for sperm range from a couple of hundred dollars well up to $800.

+ Donors can potentially make up to $750 per month (though we’re not sure how often you can actually donate), and you’re paid for your sperm, says Cryos, but for your “time and transportation.” However, not all donors are paid equally – what you can make depends on the quality and quantity of your sperm, and you can make bonuses depending on other factors.

+ The staff of the sperm bank is totally checking you out. Check out these “staff impressions” of some of the donors on Cryos’ site:

“Darcy is tall with an athletic build and is very handsome. He has an incredibly full head of hair and striking, big brown eyes.”

“We here at Cryos NY all agree that [Cliff] bears a striking resemblance to the cyclist Lance Armstrong.”

“Nolan does not have an ounce of fat on him.”