This Little Underground: tUnE-yArDs and Son Lux (The Beacham) 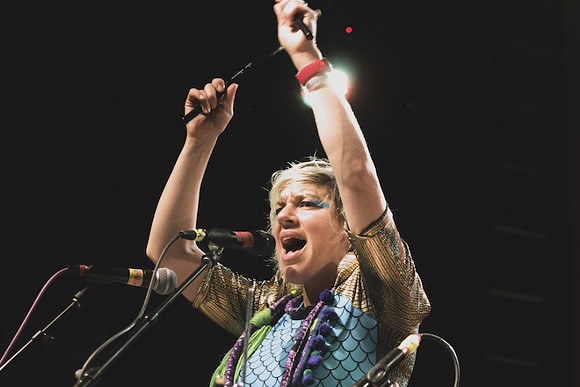 I wasn’t always on the tUnE-yArDs train. Judging from the polarization around them, I’m not alone. From head to toe, this is a pretty labored act, sometimes to the point of high contrivance. Just look at their excruciatingly capitalized name – I’m pretty sure my copy editor is straight-up seizing right now. But step by step, their vision has developed cogency beyond weird-pop circles, best crystallized in their exceptional latest album Nikki Nack.

Following through with this bright evolution, their full-band performance (April 3, the Beacham) was a big, complete splash of color, show and nerve. The charged, almost African polyrhythmic intelligence of their forward tribalism was delivered with the thrust of two percussionists and the fiery humanity of their melodies amplified with two backup singers. The total effect was rhythmically dazzling, constantly surprising pop music delivered with manifest core and force. Maybe the passionate reception and a deafening demand for an encore at this stop of their first Florida tour ever will guarantee it won’t be their last.

Also impressive was opener Son Lux, whose rhythmic invention and art-pop sense made them a natural pairing with tUnE-yArDs. Now clearly beyond the left-field hip-hop accents of the early Anticon days, Son Lux’s music speaks a fully modern, integrated sonic language where rock and electronics don’t feel like fusion. The result is a rich, unusual sound with a true eye on the future of pop.