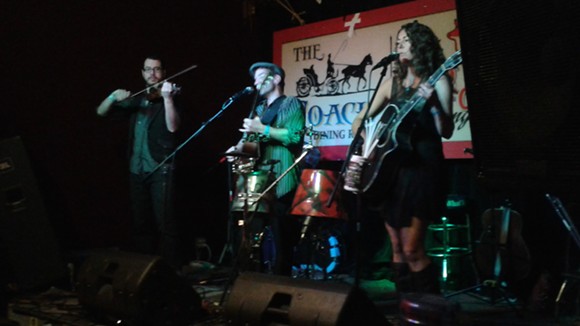 The live circuit abounds in roots acts that combine musicianship, show and levity. But it’s a tricky balance. They’re all designed to have immediate appeal yet most get stale fairly quickly. In their first headlining show in Orlando (April 7, Will’s Pub), however, Connecticut quartet Caravan of Thieves shot the straits of this niche pretty well with a gypsy swing sound peppered with pop-music nods.

Of course, there was the low-hanging crowd fruit of things like a “Bohemian Rhapsody” cover and a devil-themed medley (stitched from snippets of the Stones, INXS, Charlie Daniels, Beck, you get the idea). But for the most part, their schtick-to-music ratio was relatively, refreshingly low. There seems to be more heart and skill than irony in what they do, which is notable given their novelty-ridden genre. Sure, they work that old-timey charm like all these bands do, but with them it’s more intrinsic than affected.

Their skill and show was demonstrated across a full arsenal of string instruments and a junkyard’s worth of repurposed percussion (buckets, bowls, cans, etc.). But despite all the eye-catching hardware, none of it was mere prop. All was used and used with virtuosity, as the rhythm solo by frontman Fuzz Sangiovanni – who’s already an ace on guitar – proved:

Caravan of Thieves is fun, spirited and all the other pleasing things you want from these kinds of acts. What they’re not, however, is parody.