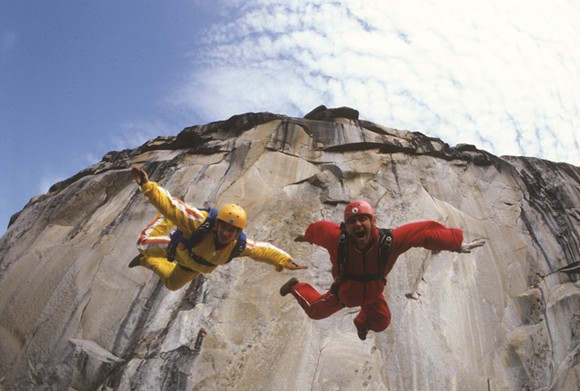 “People like that have something inside, something to do with death.”

Those words spoken by Cheyenne (Jason Robards) in the immortal Once Upon a Time in the West ring true for Carl Boenish, who went from engineer, to skydiver, to filmmaker, to cliff jumper before essentially founding the BASE jumping movement in the late 1970s. But they also belie the seemingly happy daredevil’s lust for life and his spiritual desire to abandon all rules of man for the rules of nature.

Sunshine Superman (2 stars), a documentary of the thrill-seeker’s life, shows Boenish and his wife, Jean, in an exceedingly positive light. Through reenactments, interviews with family and friends, and abundant clips of Boenish’s adventures, director Marah Strauch fashions a documentary fitting its subject. But, regrettably, the doc, like so many others that get just a bit too close to their subjects, falls victim to reverence while neither challenging us nor breaking much storytelling ground.

Yes, the soaring cinematography is spectacular and can almost convince you to follow in the footsteps of the Boenishes and their fellow daredevils. But then the music kicks in, the reenactments sap the realism and the interviewees become a tad preachy, and we’re left with a production that, though competent, isn’t weighty enough.

If you’re a fan of extreme sports, particularly BASE jumping, this is a must-see. If you’re not, you may still appreciate the film on a visual level and empathize with its characters, but your time would be better served by choosing Limited Partnership, Once Upon a Crime: The Borelli-Davis Conspiracy, The Cult of JT LeRoy, Top Spin or another one of the stronger documentaries at this year’s festival.

The film has its final showing tonight, at Regal Winter Park Village, at 9:30 p.m.