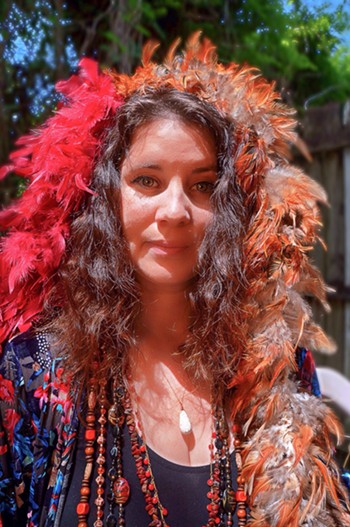 Local musician and rising local theater force Andy Matchett has called upon the tremendous vocal prowess of powerhouse singer Kaleigh Baker to conjure music legend Janis Joplin onstage in a Fringe Fest production of Janis Joplin, Little Girl Blue, an original play that Matchett penned (and directs) that retells the triumph and tragedy of Joplin's life through the perspectives of her inner circle.

Baker's performance of Joplin songs includes a talent-laden backing band, including guitarists Brian Chodorcoff (The Legendary JC's) and Jeff Nolan (The Ludes), drummer Mark Janssen (The Ludes), Chris Charles in charge of the horn section and many other notable locals. While it's just a coincidence of timing, this amazing announcement – which is almost a beefed-up reprise of a Janis Joplin musical revue Baker performed in 2010 for Woodstock Jambando – comes on the heels of Baker's successful online funding campaign, which means she will be making that record, Pittston Piston, we told you about last month. (Congrats to Baker – can't wait to hear it!)