Letters to a Satanist: Will a proposed 10 Commandments monument in Arkansas inspire another Satanic statue?

Arkansas recently introduced a bill to place a 10 Commandments monument on their Capitol grounds. Does The Satanic Temple have plans to petition for their own monument in reply?

Arkansas is a state that has risen solidly into the upper rankings for violent crimes (11th of 50), while in the course of the past 2 years alone has plummeted from 5th to 36th in its education ranking. Local residents of any mental clarity surely can’t rest any easier seeing that politicians like senator Jason Rapert have been working, with singular focus, on penning and passing a fallacious and flagrantly fabricated bill meant to allow for the erection of a 10 Commandments monument at the state’s Capitol. Rapert, who seems entirely too unintelligent to experience the bafflement befitting his miseducation, instead presses forward with oblivious certainty that the archaic Decalogue formed the basis of the American Constitution. According to Rapert’s bill — which appears heavily plagiarized from the earlier Oklahoman bill (which itself may have been lifted from elsewhere) “God has ordained civil government and has delegated limited authority to civil government, that God has limited the authority of civil government, and that God has endowed people with certain unalienable rights, including life, liberty, and the pursuit of happiness.”

It’s little wonder that Sunday School Rapert — who regularly posts biblical passages to his Twitter feed — chooses the Decalogue over earlier legal codes such as the Hammurabi or the Code of Urukagina. Nonetheless, Rapert assures that t he placement of a 10 Commandments monument “shall not be construed to mean that the State of Arkansas favors any particular religion or denomination over others.” 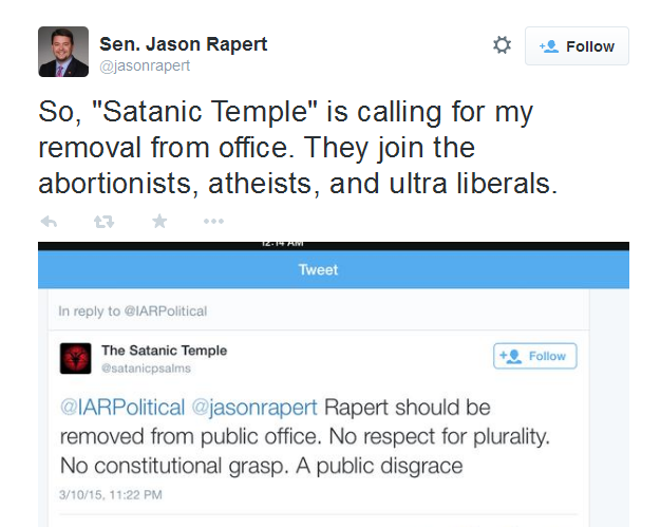 With such a broad view apparently being taken regarding influences upon early American legal codification, we feel our argument for a Satanic Baphomet monument — placed alongside the 10 Commandments — is as strong, or stronger, than the arguments for the Decalogue itself. As I previously stated while making the same case for placement in Oklahoma (the fight for which continues still), it was, partly, our witch-hunts that helped us, as a civilization, to realize our need for a rational, secular legal system. “Standards such as the accuser’s burden of proof, the presumption of innocence, a respect for material evidence, are all a result of our finding ways to subdue brute mob intolerance. Today, we are rightly offended by anti-blasphemy laws and divine fiats.”

“Our monument will stand in honor of those unjustly accused — the slandered minority, the maligned outgroups — so that we might pay respect to their memory and celebrate our progress as a pluralistic nation founded on secular law.”
After all, while neither the US nor Arkansas Constitutions make any reference to the 10 Commandments, the Arkansas Constitution states,”no preference shall ever be given, by law, to any religious establishment, denomination or mode of worship, above any other.”

Our monument for Oklahoma is completed and awaiting placement. When the Associated Press asked me about Arkansas, I stated, "We have the mold standing by waiting for just this very situation.”


Arkansas can expect us, and I’m fully willing to help educate the witless Mr. Rapert in a forum of debate, should he care to correct his spurious knowledge of Constitutional Law and public duty. The people of Arkansas deserve better than a representative so lacking in the most elementary understanding of his office and its intended limits.