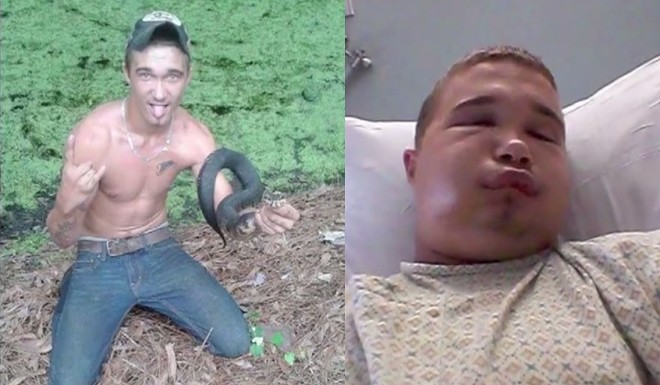 Last Saturday, Wimauma resident Austin Hatfield, a man whose hobby is kissing snakes, was not surprisingly bitten in the face by a cottonmouth he kept in a pillow case. It was originally reported that Hatfield was bitten after the snake (also known as a water moccasin) escaped the pillowcase. However, his friends told Fox 13 of Tampa that Hatfield removed the viper from the pillowcase to give it a quick smooch and, of course, it bit him directly on the lips.

Jason Belcher, a friend of Hatfield, was there when it happened. "He ripped it off his face, threw it on the ground and he started swelling up immediately," Belcher told Fox 13. "It was pretty frightening. We've done a lot of stuff together. This is the one thing that scared me the most."

Hatfield was then rushed to Tampa General Hospital and admitted in critical condition. He has since been upgraded to good condition and is expected to fully recover. Though Hatfield seems to be in the clear, authorities with Florida Fish and Wildlife are still waiting to speak with him, since he was keeping the snake illegally without a proper permit or cage. It hasn't been determined whether or not Hatfield will face charges.

According to Fox 13, the snake was euthanized in order to properly identify it and to treat Hatfield and his massive lips.