We've always wondered how gross it might be to suit up in one of those costumes Disney cast members share, and it turns out the answer is: It can be pretty gross. 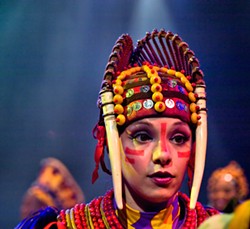 Three Disney performers were fired last June when they refused to put on sweaty, dirty spandex unitards and perform in the "Festival of the Lion King" show at Animal Kingdom. Their costumes (see photo above of a rack of them) are supposed to be cleaned between shows and have 12 hours to dry – we live in Florida, guys; the sweat struggle is real – but a rack of dirty uniforms that had been danced in and then rained on was rolled up next to the clean ones, pressing all up against them and grossifying them.

The cast members refused to don that nasty mess and go dance for the kiddies, so Disney fired them. Now a union arbitrator has ruled that Disney violated the collective bargaining agreement guaranteeing the employees clean costumes, which, he wrote, "states unconditionally that all wardrobe shall be clean and dry, without reference to the existence, or not, of actual danger."

In other words, it doesn't matter if there are not actual maggots visibly crawling all in and out of that shit, you still have to provide your employees safe working conditions. Now Disney must not only rehire the three performers, but also has to give them back pay.

Think the performers are being prima donnas? "The clean-costume provision was added to the agreement more than a decade ago after incidents of rashes, scabies and other infections," reports NBC Miami. Kinda makes your creepy office chair seem not so bad after all.