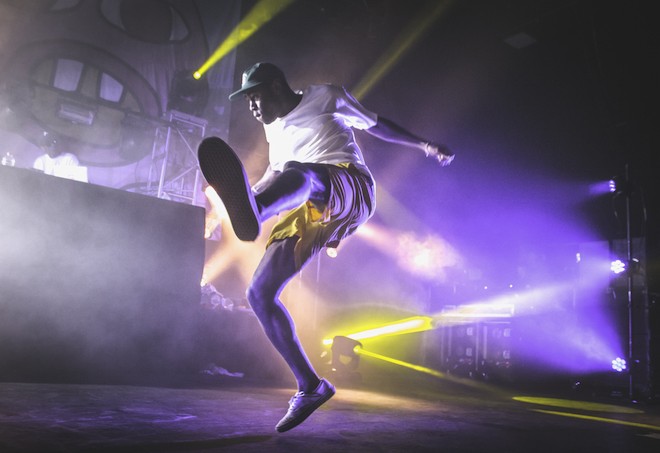 These Odd Future cats are an intriguing lot. For both better and worse, this crew is so emblematic of the new reality. Like the internet (the monolith that rules modern life, not the Odd Future spinoff group the Internet), these art-punk rappers are a hive of frenzy. The intensity of their left-field creativity is a good thing, and there are glimpses of brilliance in their work. But the side effect of that fervor is its chronic ADHD.

Orlando was supposed to be invaded this week by two members separately - Tyler, the Creator and Earl Sweatshirt - but the Earl Sweatshirt show originally scheduled for tomorrow at Venue 578 is now postponed until September 3. At OFWGKTA kingpin Tyler’s show (April 28, Plaza Live), there was an opener, but this wasn’t a concert that needed any warming up. The throngs were chanting opener Taco’s name before it even started. As soon as he pressed play – and that is practically all he did in live terms – the room went off like a human popcorn machine:


A remarkable reception for a guy who neither rapped nor spun and was basically a hype man for a laptop, no?

Marquee man Tyler, the Creator – flanked by Jasper Dolphin – was thankfully much more live. Although there was little craft demonstrated in the copious rap barking that often blew out the mic, his delivery was big in gusto. And his connection with the fans was notably personal and earnest.

Though it can only make your statement more cogent, the finer points of live performance can’t fully portray the countercultural juggernaut that is Odd Future. Tyler and his crew are doing something right to whip up near-psychotic excitement, and credit’s due for building a fever hot enough to precede you. Very few today have blazed a fresh reality with such brash, dominating strokes to become a new-guard flagship like these guys. They are, without question, one of the most imagination-grabbing cabals in the musical zeitgest right now.