6 Reasons why Universal's Skull Island: Reign of Kong should rule 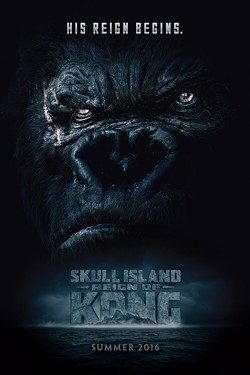 At 11 a.m. this morning, Universal Orlando shocked absolutely no one in the theme park community with their long-overdue official announcement that a new King Kong attraction is currently under construction in Islands of Adventure. The new ride is titled Skull Island: Reign of Kong, and is scheduled to open in the summer of 2016 between Toon Lagoon and Jurassic Park.

I’ve been keeping a close eye on this #Kongstruction project since it was only known by its code number (340), and have been privy to some preliminary plans and insider info. So now that the monkey is officially out of the bag, here are six reasons to get excited about the return of the King.

As anyone who has walked through Islands of Adventure in recent months can tell you, the new Kong attraction isn’t just big, it’s huge (sorry, Fun Spot). Ginormous stone structures straight out of the 2005 King Kong film by Peter Jackson (who is consulting on the new ride) surround a 72-foot tall wall which is the gateway to this indoor/outdoor adventure’s interior portion. The scope of the façade rivals anything in an Orlando park, and aerial photos prove that the show building hiding behind it is equally massive. Universal Creative’s Mike West confirmed that this will be among the longest attractions they’ve ever created in terms of ride duration, so expect an E-Ticket experience in every sense.

Universal has been raising the bar for queue design with their recent rides (see: everything Harry Potter) and Kong looks to continue that trend. As explorers embarking on a jungle expedition, you’ll approach under an archway resembling Kong’s massive head before heading through ruined temples and twisting caverns haunted by “hostile natives.” Political correctness aside, it sounds like and interesting first act to your adventure.

At first glance, the open-sided trucks guests will ride in appear suspiciously similar to the ones used at Kilimanjaro Safaris in Disney’s Animal Kingdom. That’s not necessarily a bad thing: the ride should have an impressive hourly capacity, and the live actors serving as your driver revives the “spieling” Universal lost when Jaws closed. But I have it on good authority that these brand-new vehicles have a few tricks up their sleeves, thanks to automated trackless technology that could allow them to take off without anyone at the wheel.

King Kong is one of the most beloved icons of Universal Orlando’s early years, and guests still wonder where his Kongfrontation ride went over a decade after its disappearance. Announcing the big ape’s resurrection is a smart way for the resort to celebrate their 25th anniversary, but don’t expect the same old 20th-century robotics to return. Instead, Kong will come to life with a combination of large-scale 3-D projections (similar but not identical to the King Kong 360 feature on Universal Studios Hollywood’s tram tour) and also — if rumors I've been told prove true — new animatronics that may move in surprising ways. If you’ve grown weary of Universal’s reliance on video screens, rest assured that a substantial portion of this attraction will be based on physical sets and practical effects.

Before you get to meet the ride’s star, you’ll have to survive encounters with some of Skull Islands ickier inhabitants, including giant critters and prehistoric predators. But don’t be too anxious, as Universal wants the ride to be accessible to all ages, and has accordingly set a height requirement of only 34 inches.

Work on Skull Island has been full steam ahead for some time now, which means we’ll only have to wait about a year until it opens. Compare that with Animal Kingdom’s Avatar expansion, scheduled to open in 2017, or Hollywood Studios’ Star Wars land, which isn’t likely to be completed before the end of the decade. And Kong is only the beginning, as Comcast announced plans during their recent second quarter earnings call to build a major new attraction every year at each of their resorts.