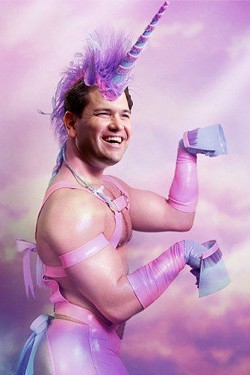 Everybody's favorite confused homophobe, Sen. Marco Rubio, R-Florida, has a history of stuffing his mouth with feet on the issue of homosexuality and LGBT rights, just as he does on about every issue, including immigration, which is what he came from and yet is still a broken plank in his "I wanna be king of the world!" presidential platform. Lately he's been intimating (ha!) that he'd show up at a gay friend's wedding with a same-sex spouse, but he wouldn't necessarily support their rights to marry, so thin is the line of the conservative agenda tightrope these days that there are no sides to fall on. Today, according to a statement from the Human Rights Campaign, Rubio is flipping his flop again, this time embracing the notion of "conversion therapy" – if you care to see how that ends up, with suicide, read here – even though the Supreme Court has refused the acceptance of the crooked practice of intimidating LGBT youth and adults and telling them that they could do better, they could have more kids, stability, Jesus. Jesus fucking Christ. So we'll pull out the Rubio unicorn pic again, because it is amazing, and we'll just let this hang there: We've met him several times, we know him to be ineffective as a leader, we don't understand why anyone would take him seriously. Also, unicorns. Here's today's message from HRC along with some helpful links. Never trust a man in unicorn.

On Conversion Therapy, Marco Rubio Shows He Can’t Be Trusted

WASHINGTON – Just weeks after claiming that he believes “sexual preference is something people are born with,” Buzzfeed has reported that Sen. Marco Rubio spoke at an event hosted by the Center for Arizona Policy, an organization that promotes dangerous, so-called conversion therapy.

The Center for Arizona Policy’s website promotes “conversion therapy,” claiming, “There are many documented cases of homosexuals modifying their behavior and becoming heterosexual through Christian ministries and counseling. This strengthens the case that homosexuality is a behavior based on choice, not on genetic fate. Organizations like the members of the Restored Hope Network continue to show that there is help and potential for overcoming sexual sin in any form.”

The group also previously pushed for a religious refusal bill that was ultimately vetoed by Gov. Jan Brewer because it would have put LGBT people at risk for discrimination.

This marks at least the second time that Rubio has appeared with supporters of conversion therapy. So-called “conversion therapy,” sometimes referred to as sexual orientation change efforts or “reparative therapy,” are based on the false claim that being LGBT is a mental illness that should be cured. Unfortunately, young LGBT people may be coerced and subjected to these harmful practices, which can result in negative outcomes such as depression, substance abuse, and suicidality. Conversion therapy has been denounced by every major medical and mental health association, including the American Medical Association and American Psychological Association. California, New Jersey, and the District of Columbia have passed laws to prevent licensed providers from offering conversion therapy to minors.

“Sen. Marco Rubio’s cynical calculations have been revealed by his willingness to campaign with the allies of dangerous, so-called ‘conversion therapy,’” said JoDee Winterhof, Vice President of Policy and Political Affairs for the Human Rights Campaign. “If Sen Rubio truly believes that sexual orientation is determined at birth, why does he believe it’s acceptable to torment LGBT young people with discredited practices that can lead to depression or suicide?”

Alliance Defending Freedom And Arizona Policy Center Wrote Arizona RFRA Bill. “The Arizona bill would broaden the state’s definition of the exercise of religion to include both the practice and observance of religious beliefs. It would expand those protected under the state’s free-exercise-of-religion law to ‘any individual, association, partnership, corporation, church, religious assembly or institution or other business organization.’ The law was written by the conservative advocacy group Center for Arizona Policy and Alliance Defending Freedom, a prominent Arizona-based Christian law firm. [Washington Post, 2/21/2014]

Many Local Family Policy Councils Advocating For Religious Freedom Bills Are Part Of Citizen Link, The Advocacy Arm Of Focus On The Family. According to Al Jazeera, “Cornerstone in Idaho, the Kansas Family Policy Council, and the Center for Arizona Policy, which supports the bill there, are all part of a network of 38 state ‘family policy councils’ pressing for these laws under the umbrella of Citizen Link, the advocacy arm of the conservative Christian powerhouse Focus on the Family. Citizen Link says its aim is to ‘help citizens understand and passionately engage in policy issues relevant to families from a foundation firmly established in a biblical worldview.’ Tom Minnery, executive director of Citizen Link, declined a request for an interview. [Julie] Lynde [of Cornerstone Family Policy Council In Idaho] said, ‘We are not following a template’ but ‘we’ve been involved in working on the language’ of two religious-freedom bills in Idaho.” [Al Jazeera America, 2/7/2014]

Rubio Raised Money For Group That Promoted “Conversion Therapy.” According to Mother Jones: “Rubio, a possible GOP presidential candidate in 2016, will deliver the keynote address at the annual fundraiser for the Florida Family Policy Council, a prominent social conservative organization that promotes so-called ‘conversion therapy’ to help LGBT individuals become straight. Conversion therapy has been condemned as a form of abuse by psychologists.” [Mother Jones, 11/11/2013]

Rubio Participated In National Organization For Marriage Robocalls Against Marriage Equality. According to the Washington Blade: “Rising Republican star Sen. Marco Rubio (R-Fla.) is speaking out against same-sex marriage in robocalls being sent to voters in states deciding the issue at the ballot and presidential election swing states, according to an anti-gay group. The National Organization for Marriage, one of the major groups opposing marriage equality, included Rubio in a press release as among those making calls against same-sex marriage along with former Arkansas Gov. Mike Huckabee and Focus on the Family co-founder James Dobson.” [Washington Blade, 11/2/2012]