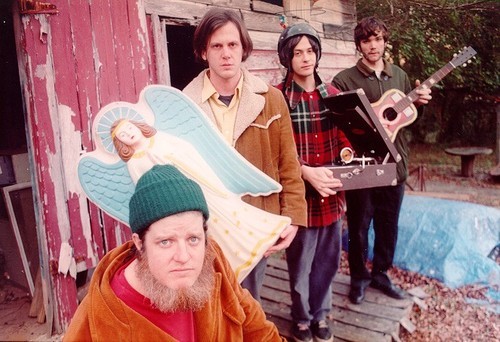 The blockbuster this week, of course, was the big Neutral Milk Hotel show (May 5, The Beacham).

If you weren’t fortunate enough to lock a ticket to the long sold-out event, you’re still screwed because we don’t have any photos to show you due to a rare artist-requested photography ban. Too bad because this could’ve been where I showed you Jeff Mangum Jesus-walking on the hands of the crowd…

Or pyro shooting from the horn section…

But as they say, pics or it didn’t happen, right? Well, what did happen was really more of a historical event than a concert. Despite a lean oevre, Neutral Milk Hotel has cemented its place as one of the best, most defining acts of the legendary Elephant 6 collective, a status that’s gained even more height after the fact. Now add the weight of this touring swan dive they’re currently on.

When band brain Jeff Mangum played to a capacity crowd in this same big venue in 2013, it was in the full swing of a gradual return to the stage that would culminate in the announcement of a full Neutral Milk Hotel reunion three months later. Now it’s the farewell to that unlikely dream since this is being billed by the band as their final tour, a last hurrah that concludes this summer.

Fever (doubled up by reunion hype and last-chance urgency) and enchantment (the inevitable effect of their strikingly enigmatic psych-pop) defined this show. It didn’t always sound great, with some of the more boisterous songs suffering from sonic cloudiness. But it felt great. It was a moment in history, one so self-cognizant that a funny flurry of crowd surfing broke out during a solo acoustic song in the final stretch of the show. And so they rode out of this town to deafening applause and into the otherworldly ether from which sprung...