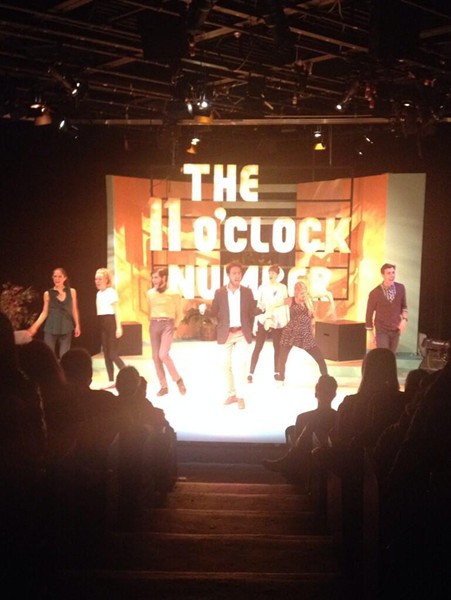 To create a new piece of musical theater, you need to take months or even years to painstakingly construct your plot and compose a score. Or, if you are the Grindstone Theater from Edmonton, Canada, you can just make up a show on the spot that sounds better than many polished, published productions.

“11 O’Clock Number” is a long-form improvised musical that does justice to this most difficult of genres. Like most improv troupes, they solicit suggestions from the audience to seed each evening’s show. But instead of using the ideas to generate a series of unrelated skits, Grindstone mills them into a cohesive single storyline with consistent characters acting out the à la minute script.

Every installment of “11 O’Clock Number” will be completely different, but based on their preview performance you should be in for solid laughs no matter when you go. The show I saw was a hilarious yet heartfelt mashup of Better Call Saul and The Devil and Daniel Webster, featuring an entertainment lawyer (Erin Albert) trying to rescue her Disney starlet clients’ (Mhairi Berg, Rachel Kent) souls from a Christopher Walken-esque talent agent (Jordan Ward) who has enslaved their father (Byron Trevor Martin) as his personal masseuse.

The cast is quick with a killer quip (“Our relationship isn’t over, it’s just not continuing”) and they ad-libbed some impressive vocal harmonies with the aid of fleet-fingered accompanist Erik Mortimer. The pace lagged a bit around the two-thirds mark, and they sometimes forget some improv basics, like their characters’ names. But they managed to pull together a satisfying conclusion, which is more than I can say about some scripted shows. Fringe 2015 is just getting started, but so far "11 O’Clock Number" is looking like the improv act to beat.