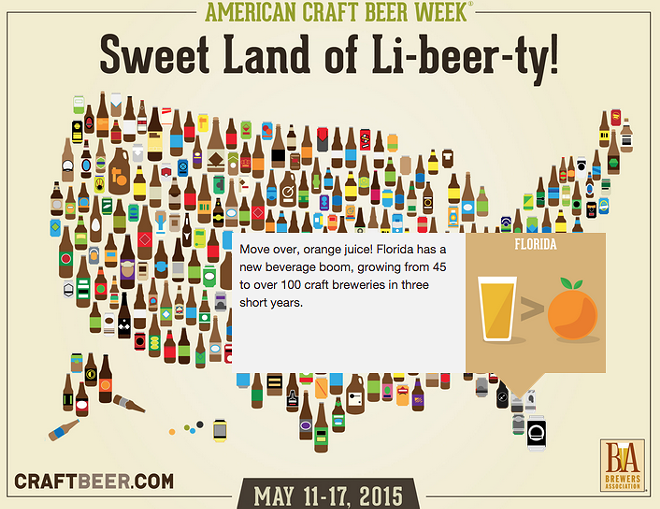 American Craft Beer Week runs May 11-17 this year. The week seeks to promote craft breweries both big and small across the country. Thanks in part to a Legislature that is finally starting to see the value of a strong craft beer industry, Florida's brewing scene is finally on the rise, with the number of craft breweries jumping from 45 to over 100 in three short years. (See you soon, 64-ounce growlers!)

Here's a list of local spots that are celebrating American Craft Beer Week with various events:

Orlando Brewing, 1301 Atlanta Ave.
OB is going all out with events every night of the week. Wednesday, May 13, brings a paired beer-and-chocolate tasting, and 6 p.m. Friday, May 15, they team with the Bias Palate for a five-course beer dinner. The five beers served will include their new Rye IPA, which diners will be the first to drink before its official release on the 16th. More info here.

The Outpost Neighborhood Kitchen, 2603 Edgewater Drive
This new College Park eatery is pairing craft beers with some of its signature items, like their Pretzel & Beer Cheese paired with Cigar City Florida Cracker, or the Beer & Bacon Flight, which pairs four different beers with, well, bacon.