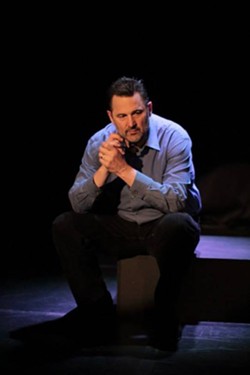 The science versus religion debate seems to be raging more fiercely today than in any era since Galileo’s day, and the battle only appears to be becoming more bitter. I wish the intractable opponents on either side could sit down together and see "CosmoLyrical," poet Phil Long’s metaphysical monologue in rhyming verse. They might not come out of it appreciating each other’s perspectives any better, but at least they’ll share the common ground of being pleasantly perplexed.

Producer Chris Foster (aka Beth Marshall’s husband) has brought Orlando Fringe the world premiere of Long’s lyrical exploration of the links between the spiritual and physical realms before he tours it to Kansas City and Colorado. “There are secrets out there in the darkness that no one knows … I’ll take you there if you trust me,” Long promises at the beginning of his show, before launching into a sing-song survey of quantum mechanics, humanism and the theology of salvation.

Long’s press release accurately likens his style to "Dr. Seuss meets Carl Sagan," and while I found his his consistent conflation of spirituality and Christian dogma to be a bit limiting, I loved his pearls of universal wisdom, like “We’re getting nowhere faster than we used to” and “Revenge is delicious, but the bones on the table at the end of the feast are your own.”

"CosmoLyrical" is a tricky, trippy piece of theater that demands careful attention to yield dividends, so take it easy at the beer tent before this one or you may drift off into the ether. As much as I appreciated Long’s intellectual intentions, I would have enjoyed it more with 10 minutes trimmed off.