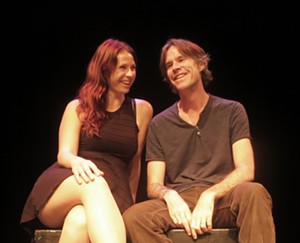 A man (Martin Dockery) sits alone in a darkened hotel room. A woman (Vanessa Quesnelle) enters uninvited, singing a Patsy Cline classic. She initially appears surprised to see him, then insists that she is the call girl he phoned for. Despite his denials, they begin a strange circular dance of role play, alternately pretending to be strangers meeting cute while comet-watching, a newly married couple on their wedding night, and a pair of old lovers reuniting after a decade apart.

To say much more about the plot of "Moonlight After Midnight" would spoil the delicate surprises awaiting inside this complex, confounding and ultimately compassionate romantic mystery. Written by Dockery with dramaturgy by Quesnelle, the script works on multiple levels: It’s a fast-talking sex comedy with palpable passionate chemistry between the likable leads; a domestic drama that’s relatively realistic despite the strangeness of the scenario; a philosophical debate about our human need for fantasy to facilitate communication; and a meta-commentary on theater that gently skewers both actors and directors.

Fringe vet Dockery is dynamic as always, his signature floppy hair and undulating fingers painting the portrait of a man for whom “go with the flow” is harder than it sounds. But by the time we reach the Twilight Zone-ish twist, it’s clear this is really Quesnelle’s showcase. She displays huge emotional range, from hard-bitten hooker to heartbroken honeymooner, along with a fine singing voice. While "Moonlight After Midnight" may seem at first to be simply an exercise in circular screwball silliness, there’s something touching and tragic awaiting inside for those patient enough to unpack this puzzle box's pleasures.