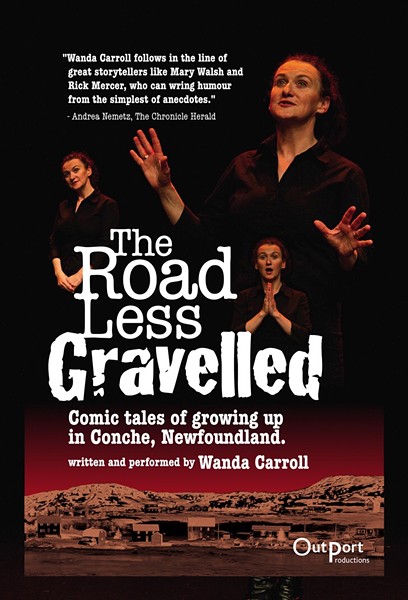 Thousands of snowbirds from Canada come to Orlando every year seeking sun, but Wanda Carroll is a self-described penguin, bringing down a frosty flurry of funny stories from her Newfoundland home. The writer-performer of “The Road Less Gravelled” comes from Conche, a seaside village of 300 souls on the impoverished Atlantic island that only joined the Canadian federation in the 1940s. Growing up in a town without paved roads, electricity or even indoor plumbing – she first heard of a flush toilet 1972, and didn’t taste fresh pineapple until age 10 – inspired Carroll with an irrepressible desire to get the hell out, a goal she’s accomplished as an award-winning Fringe monologist.

Carroll’s childhood anecdotes mine mirth from misery, like a cross between Garrison Keillor’s Lake Wobegon stories and Frank McCourt’s Angela’s Ashes (minus most of the dying). You wouldn’t think that tales of almost being burnt to a crisp as an infant, kissing her dead grandmother’s corpse, or getting her first dentures as a grade-schooler would be a laugh riot. But Carroll’s light touch takes the sting out of her underprivileged upbringing, leaving behind the beauty of a close-knit community and a sure-fire folk remedy for removing warts.

My only fear is that Carroll’s soft-spoken brogue isn’t showy enough to stand out in the Fringe’s crowded field of solo shows; she could sometimes could barely be heard over the Red venue’s air conditioning. That would be a shame, because hers is a voice that’s worth hearing.