7 reasons to participate in National Bike to Work Day, which is Friday 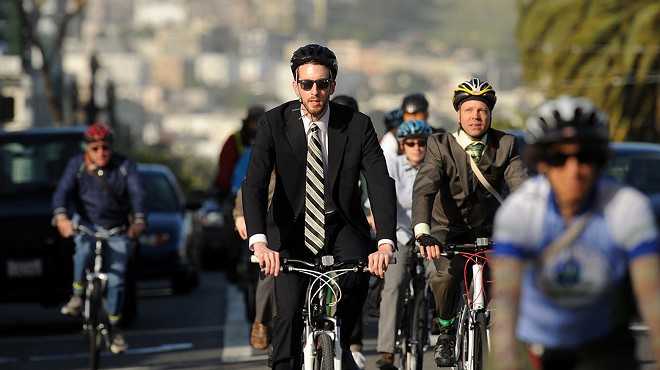 So, if you had some lame excuse for not hopping on your bicycle and peddling across town last time, Friday is your chance to make up for it.

If you're on the fence, know that you'll receive the internal satisfaction of knowing you're a better human being than your co-workers—who likely drove to work while slammin a croissan'wich. There's also a ton of other positive benefits to National Bike to Work Day. Here's a list of great reasons to bike to work courtesy of MyCityBikes.org:

1. Save Money. A 2012 Forbes magazine article reported that, "the average annual operating cost of a bicycle is $308, compared to $8,220 for the average car." Even for someone just getting started and purchasing all the equipment they need, they'll still save thousands on biking instead of driving alone. You'll save even more when you can cancel your gym membership since you'll be getting daily exercise going to and from work.

2. Double Time. Getting two things done at once hardly ever results in them both getting done well. Bike commuting is an exception. By commuting on two wheels instead of four, the rider will arrive at their destination while getting an effective cardiovascular and strength building workout.

3. Make Your Kids Smarter. Bike to Work Week isn't just for grown-ups. Kids can bike to work, too. It's called biking to school and it has just as many benefits for children as it does adults. A study at Aarhus University in Denmark found that kids who use active transportation like biking to get to school improve their ability to concentrate in the classroom even more than their diet.

4. Spare the Air. The Union of Concerned Scientists reports that, "transportation is the largest single source of air pollution in the United States."The cocktail of toxic fumes that come out of our cars includes particulate matter, hydrocarbons, nitrogen oxides, carbon monoxide, sulfur dioxide, benzene and more. Biking not only saves about a pound of air pollution per mile, but the people riding bikes, even on the road, inhale as much as 60% less air pollutants than those who drive to work.

5. Get Sick Less. The average U.S. worker takes 4.9 sick days per year. Dutch economic think tank TNO found that employees who biked to work took an average of 1 less sick day per year than their non- cycling counterparts. As it turns out, a bike ride a day keeps the doctor away.

6. Stress Less. According to the AAA Foundation for Traffic Safety the reported incidents of "aggressive driving" have increased by about 7 percent each year since 1990, but people who bike to work have a different experience. "By contrast, studies comparing the experiences of commuting by bicycle and car report that cyclists find their mode of transport at least as flexible and convenient as those who use cars, with lower stress and greater feelings of freedom, relaxation and excitement," reports the New Economics Foundation.

7. Get More Done. Biking to work improves focus and productivity. A study published in the Journal of Applied Physiology found that regular exercise not only improves muscle condition and fitness, but that of the brain as well. According to the US Department of Health and Human Services pre-work  exercise like bike commuting has been shown to increase employee work performance by as much as 52 percent.

Getting started is easy. Download the free local Orlando Bikes app on your Apple or Android device to find local bike lanes and paths to follow on your commute at http://www.mycitybikes.org/florida.