Borderline: ACLU map shows that the entirety of Florida is a rights-free immigration zone 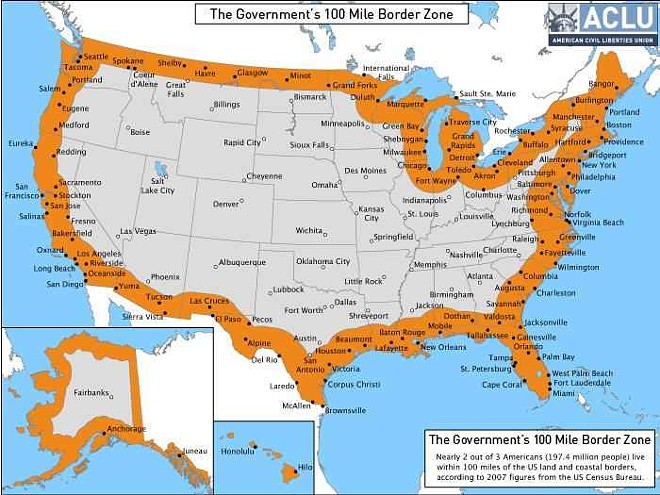 Wait, what? Not to freak anyone out or anything, but it would appear that we're all immigrants who can be stopped and be searched for no apparent reason, according to a map released by the American Civil Liberties Union that we just came across. Anyone operating within 100 miles of a a the United States Border – which would mean all of the Sunshine State, all of Maine, all of Michigan and all of Hawaii – could be subject to the unsubtle frisks and arrests of border patrol agents, some of whom, allegedly, are rewarded for their quotas on arrests with GIFT CARDS!!! The more you know!

So sayeth the ACLU:

Many people think that border-related policies impact only people living in border towns like El Paso or San Diego. The reality is that Border Patrol's interior enforcement operations encroach deep into and across the United States, affecting the majority of Americans.

Roughly two-thirds of the United States' population, about 200 million people, lives within the 100-mile zone that an outdated federal regulation defines as the border zone—that is, within 100 miles of a U.S. land or coastal border.

Although this zone is not literally "Constitution free"—constitutional protections do still apply—the Border Patrol frequently ignores those protections and runs roughshod over individuals' civil liberties.