Depressing study of the day: Orange County one of the worst places for income mobility for poor kids

Two Harvard economists, Raj Chetty and Nathaniel Hendren, recently conducted a study on income mobility and the best and worst places for poor kids to grow up if they ever hope to break the poverty cycle. According to the study, poor kids who grow up in both Orange and Seminole counties face pretty tough odds when it comes to income mobility

Orange County, the economists found, was one of the worst places in the nation in terms of giving poor kids a chance to earn an average salary by the time they reach adulthood. Kids who grow up in Orange County are likely to earn about $3,500 (or 13 percent) less than the average income earned by poor kids who grew up in better areas. Orange ranked 77th out of 2,478 counties surveyed nationwide – that's pretty bad. 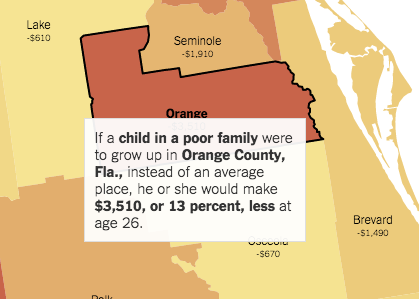 Other Florida counties where poor kids don't stand much of a chance of moving up the income ladder as adults:

Gadsden County: Kids here can expect to earn about 15 percent, or $3,910, less than average when they are adults.

Hillsborough County: Poor kids who grow up here have about the same prospects as kids from Orange County.

Lee County: Poor kids who grow up here earn about $2,940 less than average.

Volusia County: Poor kids who group up here earn about $2,830 less than average.

Seminole County: Poor kids who grow up here earn about $1,910 less than average

How did other Central Florida counties rank. It turns out that Lake County is one of the best places in the region for poor kids to grow up if they hope to earn more money as adults, followed by Sumter and Osceola.

You can review the study, called the Equality of Opportunity Project, here, or check out the New York Times' interactive map and analysis of the work here.