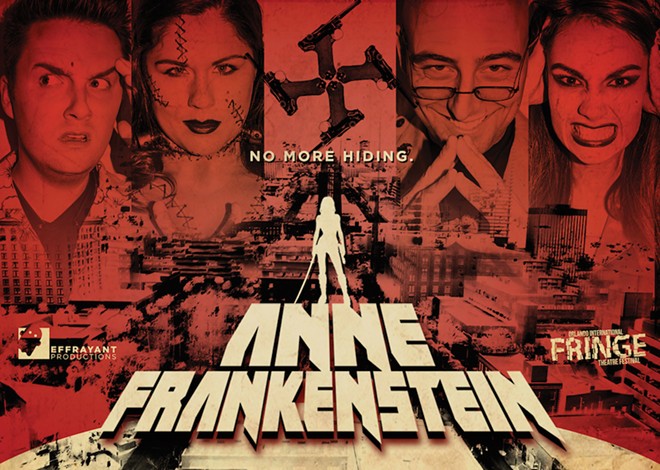 From the twisted minds of Michael Knight and Adam McCabe, Anne Frankenstein opens with a flair reminiscent of classic Tarantino. Complete with the crispy vinyl pops of a 1970s funk instrumental, the show’s lights go up on a pair of Nazi henchmen running from an unknown assailant. As the denim- and swastika-clad stooges nervously banter about their safety in dialogue that could have come straight out of a SciFi Network feature, the samurai sword-wielding reanimated corpse of Anne Frank bursts onto the scene. “Believe me, boys, hiding never works,” she says with a grin before cutting down her enemies.

Anne Frankenstein lives up to its hype as one of the “most shocking shows at Fringe,” in that it’s shockingly good. Keeping true to its “grindhouse” stylings, from the comedic timing of the Mel Brooks-style puns and B-movie soundtrack to the hokey-yet-intense fights and contrived romantic arc, everything about this show keeps the audience engaged and laughing throughout.

McCabe, a self-described horror aficionado (also former marketing designer for the Orlando Fringe Festival and current art director of Orlando Weekly)*, makes his directorial debut here, but you wouldn’t know unless I told you. The cast of seasoned Fringe and Disney/Universal performers absolutely kills it in their embodiment of hopelessly flawed cartoonish characters.

Knight, in addition to writing the book, stands out as Heindrich von Arschloch, portraying the Nazi leader as a queer combination of Dr. Evil and Hedley Lamarr. Lauren Culver’s Anne Frank comes close to the calculated ferocity of Kill Bill’s “Black Mamba,” but ends up more of the Jewish girl your grandmother hopes you’ll meet someday. Oh, and shouts out to Travis Eaton for pulling off an on-point Steve Buscemi accent and Danielle Miller for wielding her sledgehammer with the sexy swagger of Harley Quinn.

* Editor's note: Since the director is an Orlando Weekly employee, we assigned a freelancer to review Anne Frankenstein. We call that "avoiding conflict of interest," or "avoiding awkward moments at the coffee machine on Monday." Mr. Braun's opinions are his own, with no undue influence from us.