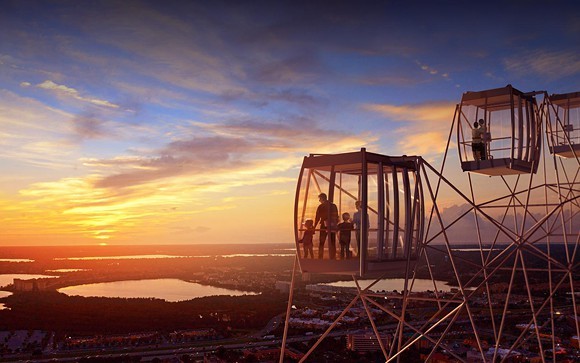 The giant observation wheel on International Drive, part of the I-Drive 360 entertainment complex, has closed due to technical issues. The wheel opened to the public May 4.

Thursday at 11 a.m., the attraction's operating system "indicated an irregularity," and the 400-foot-tall wheel was shut down. No indication was made on the wheel's Facebook page or Twitter feed, but MyNews13 caught a screengrab of a message on the attraction's website stating simply, "The Orlando Eye is closed due to a technical issue." Six hours later, Orlando Eye management said they weren't sure when the wheel would reopen.

This is the second time the wheel has been shut down in a week, after a similar brief closure on Sunday.

"As a precautionary measure, the decision was made to temporarily cease operation of the Orlando Eye and investigate further today," said an Orlando Eye spokesman, in an official statement. "Our engineering team is working to ensure everything is operating properly and will return the wheel to full operational status as soon as possible."

No information was given as to whether anyone was on the wheel when it was shut down.