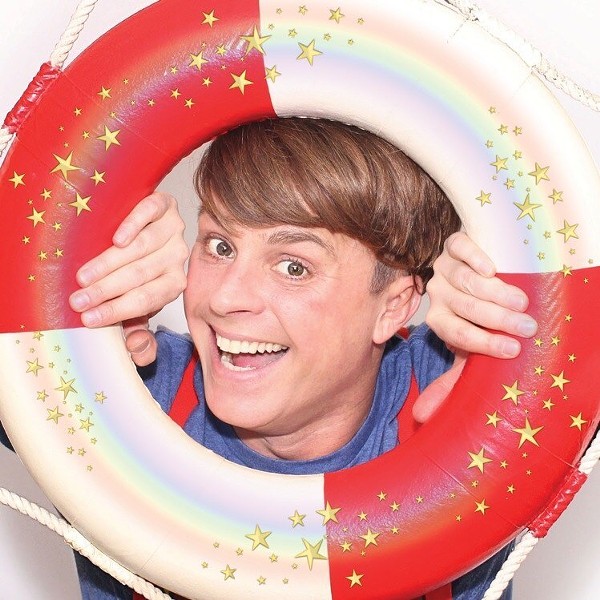 Last year, New York solo performer Peter Michael Marino mined his autobiographical experiences writing a West End failure for his very funny show Desperately Seeking the Exit. This Fringe, he’s returned to prove he can be just as hilarious with a fictional theatrical train wreck in Late With Lance!, a faux talk show about a 15-year cruise ship Ice Capade understudy with delusional dreams of stardom. Lance looks like the love child of Waiting for Guffman’s Corky St. Clair and SNL’s Stewart Smalley, and he’s just so super enthusiastic to meet all his new best friends in the audience that you don’t know whether to give him a cookie or shoot him with a tranquilizer dart.

During his hour-long appearance at OMA’s intimate Bronze venue, Lance speaks in musical theater lyrics (each reference helpfully/annoyingly identified by show and year), shares hopes from his dream journal (which don’t include “hosting a talk show in the coat room of an art gallery”), and enlists audiences members as substitute guests to replace Hugh Jackman and Liza, who somehow failed to RSVP.

Between the opening number (a reworking of “One” about single-name celebs) and the grand finale (which features Lance in a coconut bra and grass skirt singing “And I Am Telling You I’m Not Going” from Dreamgirls), there’s a ton of inside entertainment references sure to tickle anyone who’s done summer stock or dinner theater. Lance’s inner life could use a little fleshing out (his two gay dads are referenced briefly, but mostly as a punchline), but his manic speed-reading of the entire Sound of Music is practically worth the price of admission alone. I’ll be sure to watch for him next time I’m on the Lido deck.