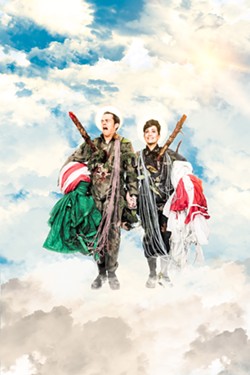 Buckle up tight, sketch comedy fans, because Chase Padgett and Stacey Hallal are back to take you on a "Joyride to Eternity." If you somehow missed their last Patrons' Pick-winning production, the pair presents a mix of improvised skits (suggested this time by audience members’ stories of birth, childhood and aging) ingeniously interwoven with pre-scripted scenes.

Due to the format’s nature, this is never the same show twice, but the sketches I saw – Moses clarifying the Commandments to a sexually adventurous acolyte, a feuding Italian couple lost in the woods, a lifetime achievement award-winner thanking the people who didn’t support her – were all so sharp it was hard to tell which ones were pre-planned.

Unlike some other talented sketch groups, Chase and Stacey do a superb job of finding appropriate punchlines to end their scenes on, and transitioning smoothly between them with an amusing word-echo effect. Consistently clever and provocative without resorting to cheap gross-out gags, "Joyride to Eternity" is a sure bet for anyone who has ever wondered if it’s kosher to have sex with shrimp (what, I’m the only one?), or simply loves to laugh.