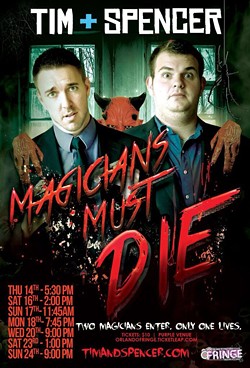 Last year, mentalist Tim Hoffman and magician Spencer Hojdila battled for sorcery supremacy in their bromance-soaked first Fringe show. For 2015, Tim + Spencer’s Magicians Must Die defy an ancient anti-magic omen, prompting the Devil to challenge the duo to a duel to the death, with the loser’s soul at stake.

The pair takes their preposterous premise as seriously as possible under the circumstances, unleashing a string of effects and illusions as if their eternal lives depended on it. Their repertoire is based on time-tested classics with comic, contemporary twists. They can make currency appear and disappear, eat Oreos with embedded razor blades, do a remote drawing using an NES Power Glove, and (in a simple yet spectacular effect) distinguish M&M colors solely by taste.

Just like last year, I found Spencer’s sleight of hand more consistently effective than Tim’s mind-reading tricks, though Hoffman still has the stronger stage presence. Their banter is better than last year, but still not their strong suit, and there’s too much interaction with balky prerecorded voices. With a bit more staging spit and polish, Tim + Spencer’s next installment (as teased in the Marvel-style post-credits scene) could be one of the top picks in Fringe’s increasingly flush magic category.