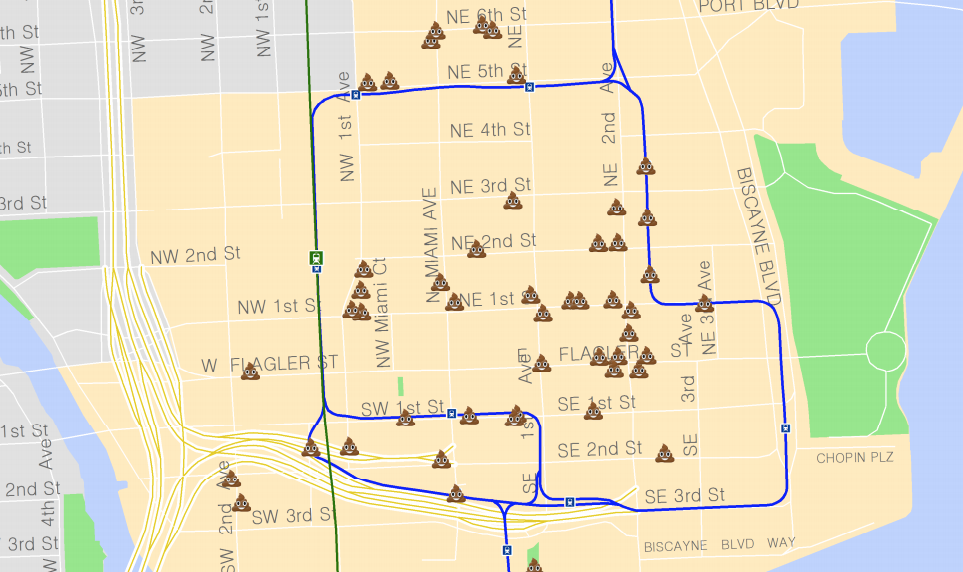 Last Thursday, Miami's Downtown Development Authority, a sort of tax-backed marketing group for the city, released a detailed and informative feces map showing where human street poop was found within an 8 hour period.

According to the Miami Herald, the map was meant as a public jab at Homeless Trust Chairman, Ron Book, who's been heavily criticized over the city's homelessness problem. Here's how the Herald explained it:

The scatological atlas, smiling poop emojis and all, was created amid a swirling dispute between downtown boosters and the Miami-Dade Homeless Trust over how to get homeless men and women off the street, and how to deal with corresponding sanitation issues. The two public agencies have been feuding for about a year now, dating back to the creation of a temporary shelter program at Camillus House, and more recently with the DDA’s promotion of souped-up porta-potties.

Long-time Homeless Trust Chairman Ron Book balks at both as ill-conceived initiatives already studied and rejected by the Trust, which focuses primarily on providing housing for the homeless. In response, he has been criticized as a “dictator” blind to downtown issues, who is flushing millions down the drain.

As part of an effort to shame Book and urge the Trust to reconsider, the DDA spent eight hours Friday documenting urine and feces, and then released its map, where the agency says feces was spotted during a sanitation worker’s eight-hour Friday shift.


If you have any plans to visit Miami in the near future, obviously stay away from Flagler and 2nd Ave. There's a lot of street poop there.