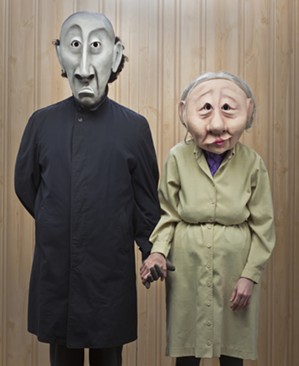 In 2013 I went over the moon for Loon, a pantomime live-action cartoon whose giant-headed star was more expressive with a static expression than most actors are with their real faces. This year, Portland’s Wonderheads are back with the Orlando debut of Grim and Fischer, their first and most successful show from the festival circuit.

This one is a duet instead of a solo show, centering on the battle of wills between a wily widow (Kate Braidwood) and the Grim Reaper (Andrew Phoenix). The angel of death arrives for the still-feisty Mrs. Fischer bearing a black envelope stuffed with doom and dramatic music; Friz Freleng-worthy silent slapstick involving television remotes, whoopee cushions, and kitchen cutlery combat ensue.

Grim and Fischer is the kind of family-friendly show that works on multiple levels: fart humor for the kids, and a moving meditation on the acceptance of mortality for the adults. (OK, adults seem to like the farts too.) This show is obviously well-polished after years of performance, and Braidwood and Phoenix are absolute masters of physical acting, expressing instantly understandable emotions with only the angle of their oversized heads.

I’ll confess that I didn’t go quite as crazy for Grim and Fisher as I did Loon; in the larger Silver venue, they lose much of the intimacy they enjoyed in the Green, though it does allow a lot more audience members to experience their magic. While it may not be my runaway “best in show” pick like Wonderheads’ last outing, Grim and Fischer certainly belongs on every Fringer’s short list.